While NBA fans are eying this Thursday's trade deadline by relentlessly refreshing their newsfeeds, players are adding fuel to the fire. Numerous players around the league, including Isaiah Thomas and Jae Crowder, have been tweeting out ambiguous emojis for the world to dissect whoever they choose. Isaiah ignited this vicious fire by tweeting this eyes emoji:

Remember this? Isaiah tweeted the same eyes emoji a day before the Celtics signed Al Horford. As if this was enough, Detroit Piston's center Andre Drummond retweeted it and then sent out his own eyes emoji: 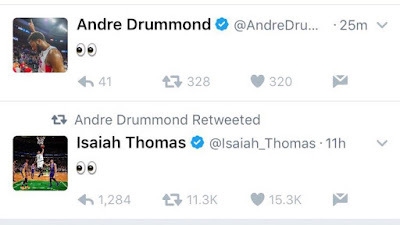 What does it mean? Are these players just toying with us for their personal amusement? That's just cruel, man. Jae Crowder added onto the speculation the next day:

Welcome to 2017, where an NBA player drops one emoji and Twitter explodes, thinking that a huge trade just went down. Who knows, maybe they were right. We will find out very soon!

Although we are likely just overreacting to a few simple emoticons, it is worth pursuing the Drummond speculation since Stan Van Gundy admitted that they would be open to offers. We asked about a potential Drummond deal last week, but that was before this mysterious Twitter speculation. Here's a brief pros and cons list about his game:

PROS:
The Detroit big man is just 23 years young and locked up until the 2020-21 season. He is second in the league in rebounding and would clearly fix Boston's issues on the boards. He is a great athlete, has good speed for his size, and finishes down low very well.

CONS:
His $25 million a year would significantly dampen the Celtic's financial flexibility. His asking price may be very high, especially for a player who is a liability from the free-throw line and is forced out of games to avoid the hack-a strategy. His lack of shooting and heavy reliance down low would clog the paint for Isaiah on drives and limit ball movement.

Justin Quinn touched on this and more just a week ago, and it seemed like most of you would be on board with a trade for Drummond. I suppose I am one of the people in the minority who believes that the cons heavily outweigh the pros. For me, Drummond's elite rebounding services would be too pricey (salary-wise, but his trade price would also probably be too high for my liking) and come without enough shooting or versatility.

Thank you Twitter for making all of our heads spin.