Celtics vs. Wizards round 3: Guess what the tough guys from Washington are doing 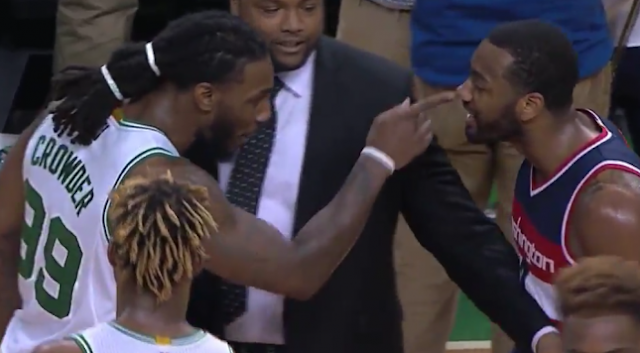 Today marks the third matchup this year between the Washington Wizards and Boston Celtics this season, and based on how the last one ended we're probably in for a very physical matchup tonight. The Wiz have decided they aren't holding anything back heading into tonights game:

The #Wizards will come to the arena tomorrow in all black b4 for Round 3 vs #Celtics. Kelly Oubre: "You know where we're going with that."
— Candace Buckner (@CandaceDBuckner) January 24, 2017

Showing up in all black, you know, like they're going to a funeral? So badass. Anybody remember the last time a team showed up wearing all black heading into a game with the Celtics? Oh right, it was the Knicks in 2012. They lost that game.

Always a terrific idea for a 2nd-year forward who averages just over 6 points a game to write the check for his teammates to cash. The last time these two teams met emotions ran high and a Jae Crowder finger poke to John Wall's nose was the breaking point. Crowder said yesterday after practice that the Wizards like to talk a little more than most teams, and that's why in their matchups those emotions have boiled over. Via Chris Forsberg of ESPN:

"They talk a little more. They say a little more disrespectful things than other teams," Crowder said. "So that’s what escalated it. I think the [foul by] Bradley Beal [on] Smart really escalated the whole game at that point. Then the talking started to come after that. So we’ll see."

Jae's bank account grew a little lighter after getting fined for his role in the altercation with Wall after the game, so he's coming into tonight with a new mindset:

The Wizards head into tonight's matchup having won 13 in a row on their home floor. On the flip-side the Celtics have lost two in a row, and look to be without their starting shooting guard Avery Bradley for the 3rd straight game still nursing his strained achilles. It's a big game for the C's, not only to end the losing streak, but it's the start of 4 games in 5 nights for green team.

Isaiah Thomas said yesterday that it's most important that the Celtics play their game and get the win, but they'll be ready for whatever Washington throws at them:

"There might be [residual effects]," Thomas said. "We just gotta be ready for whatever comes our way. We’re not going to shy away from it. We’re all human, so there’s probably going to be a little bit of physicality, a little bit of things that carry over for [Tuesday's] game. The most important thing we got to do is just try to take care of business and end their winning streak at home.

The Wizards sit just 3 games behind the Celtics in the standings. With Toronto on a three-game losing streak themselves and heading into a matchup with the Spurs later today, this game tonight and the stretch that follows it could have huge playoff implications come April for the Celtics.

Celtics-Wizards round 3 tips off at 7pm tonight at the Verizon Center in Washington.