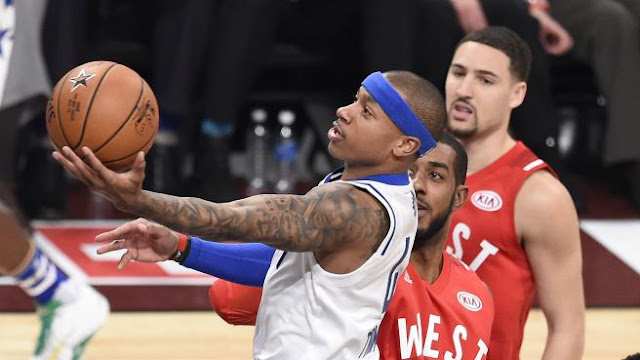 The Eastern Conference All-Stars were announced on TNT tonight and DeMar DeRozan beat out Isaiah Thomas for the second spot in the Eastern backcourt.

Dwyane Wade, who by fan vote should have been the second starter in the East, was not nearly as popular among the media and player votes, ultimately keeping him out of the starting lineup.

Based on the numbers, it seems like Isaiah and DeRozan tied for second, but then it came down to the fan vote as a tiebreaker, where DeRozan has the edge.

IT will absolutely make the All-Star team, as it's clear he was respected by players and the media, and it comes down to coaches choices for the reserves, but it would have been an honor for Isaiah to be a starter considering everything he's done for the C's this season, especially in the fourth quarter.

But, clearly, with the way starters are chosen, it isn't structured to give the most deserving players starting spots. Instead, it rewards popularity. Fortunately, the new voting system, that incorporates media and player votes, evens it out slightly, but the fan vote makes it lopsided to the more popular players.

Regardless, C's fans should expect to see Isaiah in New Orleans for the All-Star game, but he'll be coming off the bench.