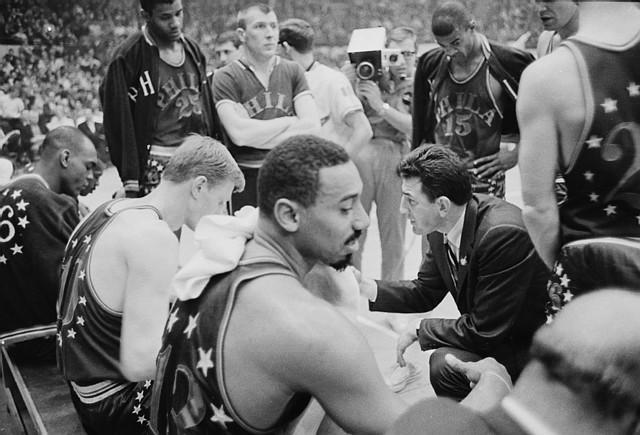 Head-to-head, Kobe Bryant and LeBron James competed on an NBA court a mere 22 times during that stretch, n’ary a one of them under playoff pressure.

On this date fifty years ago, Wilt Chamberlain’s Philadelphia 76ers and Bill Russell’s Boston Celtics were facing off for the 29th time, looking to break a deadlock in this segment of their personal series. These 29 games, it should be noted, had occurred in just 23 months – since Wilt’s trade back East at the 1965 All-Star Game – and don’t include his five-and-a-half seasons with the Warriors. 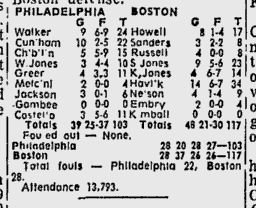 Perhaps due to the oddity of a Sunday evening home game, that night’s crowd at the rickety ol’ arena above the train station fell 116 bodies short of capacity. The league’s elite had not played for six weeks since splitting decisive home-court victories on consecutive early-season Saturdays – though they’d been able to keep an eye on each other via the 1960’s version of League Pass, the NBA Doubleheader, having already appeared together at three such extravaganzas during the season’s first eight weeks.

The familiarity between the league’s chief rivals had gotten itself tinged with a little contempt during this most iconic of seasons – if we are to believe Mr. Auerbach and Mr. Feinstein, that is. At one early-season path-crossing, Chamberlain responded to Red’s typical amiable greeting and extended hand with an un-deleted expletive, offered much the same to Russell. 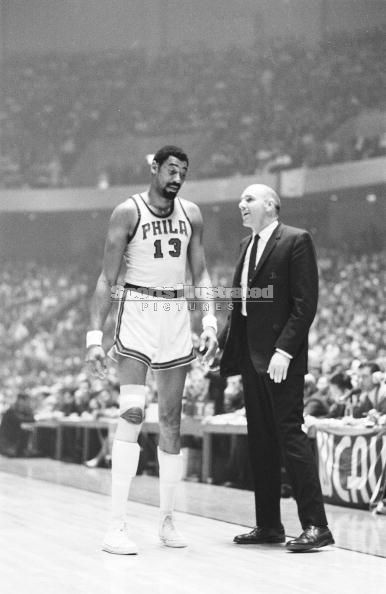 The newly-retired Auerbach was more puzzled than offended. He soon discovered that, along with persuading the Big Guy to establish an in-town residence, Coach Alex Hannum had Wilt convinced that Red’s overtures of friendship and concern were insincere, a ruse designed to gain a competitive edge on his team.

Now, it wasn’t in Chamberlain’s nature to play that role for long – Red claimed he simply realized it wasn’t altering anything – and Russell made a point of stopping by the 76er locker room to congratulate Wilt personally at the conclusion of that season’s Eastern Division Final. (The disagreement that led to a 20-year rift between the two men would not occur for another 28 months.)

Auerbach and Chamberlain were back on cordial terms in no time. The incident did seem to affect Red’s perspective on Wilt’s coach, whom Auerbach had briefly considered just a year earlier as a potential replacement on Boston’s bench. This little anecdote, and Red’s dismissive assessment, “Guy wasn’t any good,” is the only mention of Alex Hannum in Let Me Tell You a Story.

Hannum’s shortcomings notwithstanding, the Philadelphia team he marched – his nickname was Sarge, after all – into the Garden that long ago Sunday was riding an 11-game winning streak and would go on to win 20 of its next 21 games.

Russell’s boys had run off five in a row themselves after a tough week or so when Sam Jones was sidelined with a fractured finger.

Each team was playing for the third time in as many nights – advantage, one would suppose, to the 76ers’ younger legs.

But the Star of the Day was the league’s best sixth-man, arguably its best all-around athlete, John Havlicek, who torched Hannum’s defense for 20 of his 34 points before halftime. A 28-28 deadlock after 12 minutes had morphed into a comfortable 65-48 halftime lead. And a three-point play by the C’s soon-to-be captain with just under three minutes to play choked off a final Philly flurry that had gotten them within nine points. The final count was 117-103. 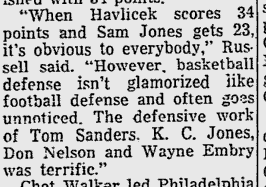 In a subsequent magazine article, Hannum put it this way:

Very true. Hannum’s Heroes had hung 50 hoops along with 53 free throw attempts on Coach Russell in his fifth-ever game. Six “Sixers” drained at least five FG’s, no Chamberlain among them, on a raucous romp to 138 points.

A week later on the parquet, that same sextet combined for just 17 makes, the team just 87 points (30 FG’s) – though Philadelphia did attempt 51 FT’s, giving them a 104-66 edge in that category through 96 minutes of play.

This time, Boston’s pesky “D” induced 54 misses in 93 shots – also reduced to 37 Philly’s trips to the foul line. Hal Greer missed 10 of his 14 shots, Wilt eight of his 13. The Celtics controlled the backboards 53-44 and were able to register an assist on exactly half their 48 FG’s. Russell and KC Jones alone matched Philadelphia’s assist total (14).

Despite playing for the third time in about 50 hours, Chamberlain and Russell each logged a full 48 minutes of duty. Russ was one of four Celtics to finish the game one foul shy of disqualification. (Don Nelson worked in five hacks in just 18 minutes of court time.)

Individually, Wilt won the scoring battle 15-8 and had 24 rebounds to Bill’s 19.

Curiously, Dec. 11’s game actually marks the 30th meeting between these teams since January of 1965, but Wilt missed one Garden Party on Jan. 16, 1966 with an illness brought on by – I kid you not! – some bad seafood.

Wilt had gone off on Red’s team for 37 points two nights earlier in Convention Hall … hmm!

For a breakdown of the numbers from this rivalry, as well as a more thorough accounting of Coach Hannum’s story, check out this Frank Deford Sports Illustrated feature.

The Philadelphia 76ers, as such, came into existence in 1962. Ike Richman, a successful Philadelphia lawyer closely allied to both Philly hoops guru Eddie Gottlieb and Wilt Chamberlain, had enlisted the cooperation of high school classmate Irv Kosloff in purchasing and relocating the Syracuse Nationals.

Even in a town named for fraternal affection, a re-named bitter rival is a tough sell to a fan base. But the influx of some home-grown talent, not the least of which the re-acquisition of the Dipper, had prospects rising both on and off he court.

On Friday, Dec. 3, 1965, the 76er team did two things it had never done before. Coach Dolph Schayes and his men repelled the Boston Celtics on their home floor by a score of 119-103.

But they, along with 9,000+ fans, watched in horror as Mr. Richman, sitting at the press table by his team’s bench as was his wont, collapsed to the Garden floor five minutes into a tie game. Resuscitation efforts by trainers, paramedics and emergency room personnel proved fruitless.

Ike Richman was dead of a massive coronary before he hit the floor.

So too, for all intents and purposes, were any chances of a Wilt Chamberlain-centered dynasty on the banks of the Delaware River.

Wilt maintained ever after that he and Mr. Richman had reached an agreement, unbeknownst to Mr. Kosloff, that Wilt’s future compensation would include an ownership interest in the team.

Now, you must understand that a Wilt Chamberlain contractual holdout was as much a part of a Sixties’ Summer as Sex, Drugs and Rock-n-Roll. So when Kosloff balked at keeping Richman’s word, a change of venue for Philly’s favorite son became inevitable and imminent. Wilt Chamberlain played his final five seasons for Jack Kent Cooke in Los Angeles.

Typical of the man’s character, Wilt kept in touch with the Richman family for the remainder of his life. He even presented to Ike’s widow the game ball from his team’s close-out Finals victory in ’67.