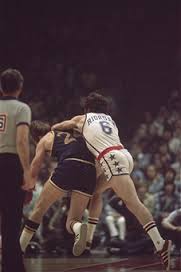 
On the Ides of December in 1966, the defending champion Boston Celtics suffered their sixth defeat as they wrapped up the first third of their 81-game regular season – the second time they’d fallen to player-coach Richie Guerin’s St. Louis Hawks.

The game was staged at the Rhode Island Auditorium in Providence, the second of four C’s tip-offs to be held at that particular “neutral” venue in Coach Bill Russell’s inaugural campaign.

Providence Friar alum Lenny Wilkins scorched the familiar nets for 32 points and helped choke off a late Celtic flurry with a three-point play in the final minute. 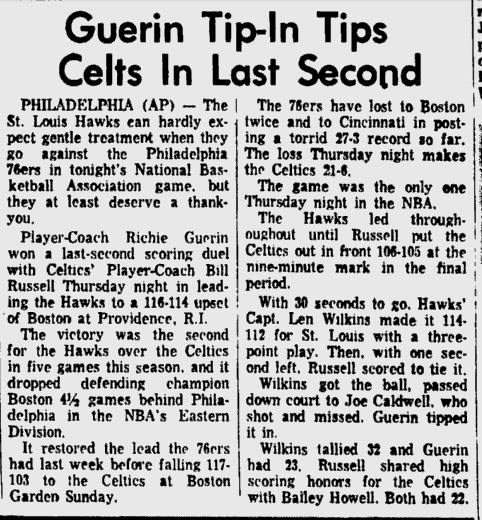 The 1966-67 Friars featured another prolific guard, a kid from the playgrounds of Boston who would become the first selection in the 1967 NBA draft. Two-time All-Star Jimmy Walker would spend his nine-year career in the relative obscurity of Detroit, Kansas City-Omaha and Houston – and become more well-known as the absentee father of Fab Fiver Jalen Rose. 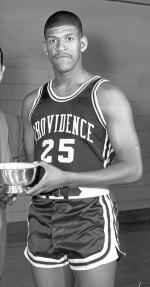 But the second-leading scorer for coach Joe Mullaney’s PC squad was a 6’4” junior forward from New York City who would go on to play in two NBA Finals and win one ring.

Quite fittingly, the 128th player taken in the 1968 draft also placed second for the Friars that season in Personal Fouls. During his first season (’68-69) with the Knicks, Mike “Give-a-Foul” Riordan scored 126 points and committed 93 personal fouls in 54 games.

The bulk of those “hacks” were intentional and strategic – committed at the behest of his coach, Red Holzman.

In those days, there still existed in the NBA the one-shot common foul. And just as the simple math of today’s game professes that “3” is greater than “2,” accepted basketball practice of the time deemed “1” less than “2.”

The deliberate foul, preferably of a suspect free-throw shooter, is a tactic as old as the game itself – and the overseers of professional basketball have ever since been attempting to manage its usage.

Riordan’s role was to commit a foul or two late in a quarter before the Knicks reached their un-penalized allotment, thus protecting a rotation player from foul trouble while “playing the odds.” Mike Riordan grew into a valuable reserve during a nine-year career with the Knicks and Bullets, earning second-team All-Defense recognition in 1972-73 … also holds the distinction of being traded for Earl “The Pearl” Monroe. 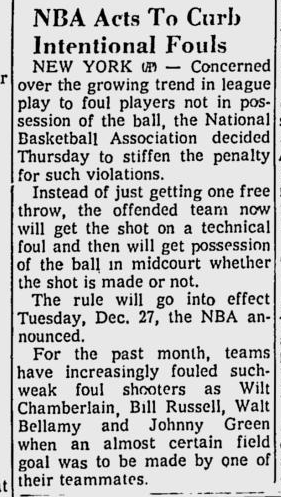 The league had already introduced two new tweaks to its procedures regarding fouling for this its 21st season. The Penalty/Bonus situation would be applied upon a team’s fifth – rather than sixth – personal foul in any quarter of play (just as it has been ever since). Also added was the stipulation that two defensive fouls during the final two minutes of any quarter would invoke the Bonus even if a team had not reached its limit – again, just like today’s rules.

It had taken the pioneers of the league a bit of time and experimentation to work out the kinks in this component of their evolving game/entertainment product. For the league’s first eight seasons, a player fouled in the act of shooting was awarded two free throws. All other fouls – including offensive fouls – were penalized with one free throw. Excessive fouls did not incur additional penalty, though a player was disqualified upon receiving his sixth personal foul.

The NBA’s first procedural adjustment came at the beginning of Season 5 (’50-51) and applied only to end-game situations, specifically a game’s final three minutes. Following a made free throw, instead of awarding possession of the ball to the team that had committed the foul, there was a jump ball between the shooter and the fouler.

Since there was no shot clock at this point, the team in the lead was inclined to pull the ball out and run clock rather than try to score. A logical counter to this strategy is intentional fouling; the by-product often some rough play.

A couple of seasons later, in the interest of fairness – when the newest late-game ploy was to have a big guy foul a little guy – the subsequent tap would involve the shooter and the defender regularly assigned to guard him. 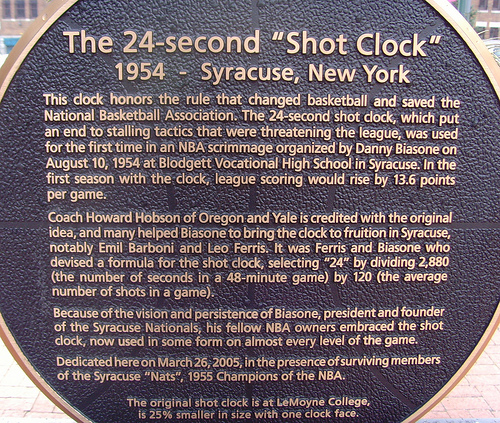 The Fall of 1954 brought a 24-second shot clock to the NBA, as well as a thorough re-vamping of the adjudication of errant behavior on the court. The final-three-minute rules could now be revoked. Implemented instead was a quarterly team limit for fouls (6) which, when exceeded, triggered a “bonus” shot – two shots for any common foul, three chances to make two otherwise.

The new rules also now mandated any defensive fouls committed in the backcourt worthy of two shots (3-for-2 in the Bonus), and that an offensive foul result in a turnover (no shots), not constitute a “team foul,” but count towards a player’s disqualification.

The rule changes for the ’66-67 season – which essentially hastened the onset of the Bonus in any quarter of play – were the first subsequent changes to this corner of the rulebook. The early ‘70’s would see the one-shot common foul replaced with a side-out; in the late ‘70’s, backcourt fouls would no longer automatically warrant two free throws.

But all the rule changes in the world don’t improve a player’s skill level.

And the league has always had its Wilts and Johnny Greens, its Greg Kites and Chris Dudleys … all the way up to the Drummonds and Jordans of today.

And game situations will continue to arise in which a deliberate foul is a team’s best option – they’ll never be able to legislate that out of the game.

The opening of the 1953-54 NBA season put on display – albeit quite briefly – the NBA’s furthest venture outside the proverbial “box” in its Rules Thinking.

Game disqualifications due to excessive fouls were eliminated. Instead, if a player committed a third foul in the same quarter of play, he was prohibited from further participation until the beginning of the next quarter.

Sounds a little like hockey’s penalty box, minus the disadvantage of playing short-handed, huh?

Fortunately for the sport, the NBA veered off on a whole different course the next year.