Celtics can't weather the storm against Westbrook, fall 117-112 to the Thunder 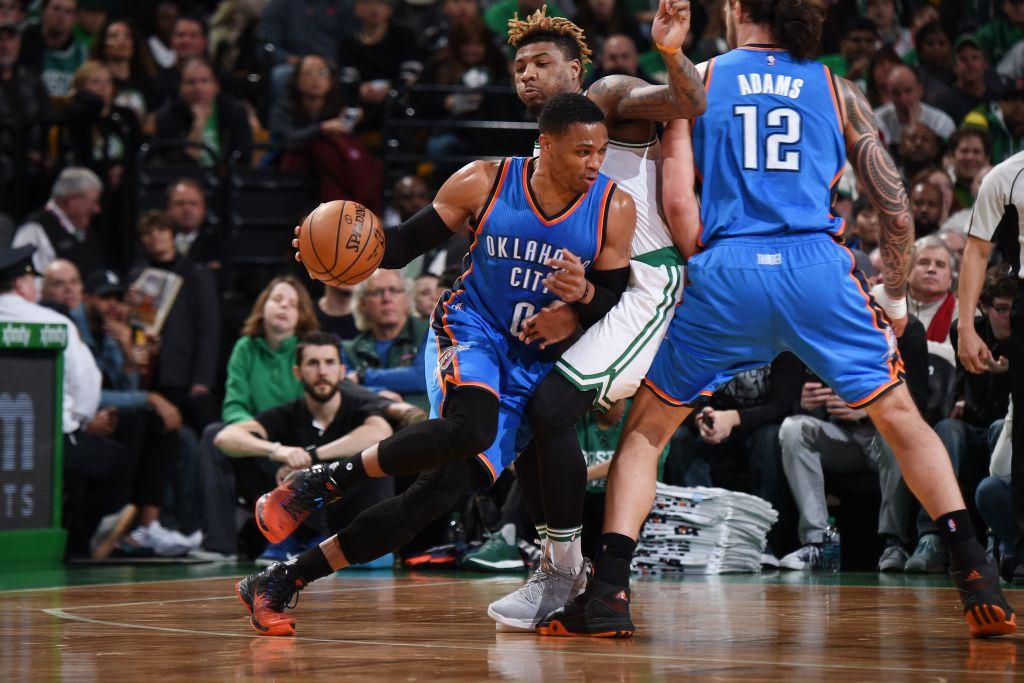 The Celtics lost a tough one to the Oklahoma City Thunder 117-112, thanks largely to another dominant performance by star guard Russell Westbrook. The OKC superstar registered his 14th triple-double of the season and had his third straight game with at least 40 points.

The first quarter should've had a much better end result for Boston. Amir Johnson, the unexpected star of the quarter, led the way for the green with nine points, three rebounds, a pair of assists, and a pair of steals in seven minutes. In that time, they assisted on eight of their 12 made field goals, commited no turnovers, held Russell Westbrook to zero field goals, and built a double-digit lead. However, when the Celtics took out their starters, defensive rebounding woes resurfaced and kept the Thunder within three after 12 minutes:

Thunder have rebounded five of their 10 misses to stick around in this game.
— Jay King (@ByJayKing) December 24, 2016

The Celtics are on top of the Thunder 28-25 after the first quarter thanks in large part to Amir Johnson's 9 points during the first 12 mins
— Boston Celtics (@celtics) December 24, 2016

Johnson came back out to start the second and, lo and behold, the Celtics offense had a scoring spurt. The run was short lived though, as turnovers and second-chance points haunted the C's. After not turning the ball over in the 1Q, Boston coughed the ball up seven times, three of which from Isaiah Thomas (his first time with at least 3 TOs in a game - let alone one quarter - since November 16).

For Oklahoma City, rookie Domantas Sabonis was ballin' out in the first half. The Gonzaga alum was perfect on his first seven shots, knocking down three straight-on threes for nine of his career-high 17 points. Oh and remember how Westbrook was without a field goal in the first quarter? Well yea, he finished with 16 points, nine assists, and four rebounds at the break, powering OKC to a 15-4 run and a halftime lead:

Al Horford has 12 points and four boards, but he and the Celtics trail the Thunder 58-54 at halftime. pic.twitter.com/iNMgFRreus
— Boston Celtics (@celtics) December 24, 2016

The third quarter opened with the Thunder continuing to exploit Boston's size, especially Isaiah Thomas'. The Thunder's bigs pounded the paint, and their guards drove and finished at the rim with little resistance. Backdoor cuts in particular killed the C's in the quarter.

During the middle of third, Al Horford was charged a flagrant foul for elbowing Westbrook in the face on a post move, and was not too fond of the call. So when he got a steal a couple of possessions later, he took one right out of Westbrook's playbook by going coast-to-coast and slamming it home himself:

Meanwhile, Johnson kept finding ways to get buckets, even though the Celtics found themselves down by nine points to end the 3Q:

When the scoreboard switched the quarter number from a three to a four, Isaiah knew it was his time to take control (per usual). Unfortunately, so did Westbrook. The two guards came into the night as the top two fourth-quarter scorers in the NBA at 9.8 and 8.4 points per quarter, respectively. The 'little guy' poured in seven quick points to slash into the Thunder's lead, and never looked back. He nailed his outside shots and danced his way to the rim at ease, finishing with crafty moves left and right:

The Thunder kept getting to the basket, but Marcus Smart had other plans when he swatted this easy Enes Kanter dunk:

Back to the Thomas-Westbrook fourth quarter showdown. Isaiah cooked Oklahoma City's defense throughout the quarter, but once he started drawing most of the attention, he began finding the open man:

It was back and forth for much of the quarter, and Brad Stevens decided to internationally foul Andre Robertson, a sub-40% free throw shooter. The plan worked (he was 1-6 from the line), but there was no way to stop Russell Westbrook, who added a five point cushion to their one-point advantage with under two minutes to play. Isaiah fired back with an and-one layup, but Westbrook hit an absolute dagger to finish the C's for good and beat Isaiah in a crazy fourth quarter showdown:

For what it's worth, Isaiah ended with 34 and 10 assists, Al Horford had 23, six boards, and fours assists, and Johnson had 17, six rebounds, and five dimes. Next up for the Celtics are the New York Knicks on Christmas Day.