Celtics in a nail-biter in Oklahoma City, drop a tough one to the Thunder, 99-96 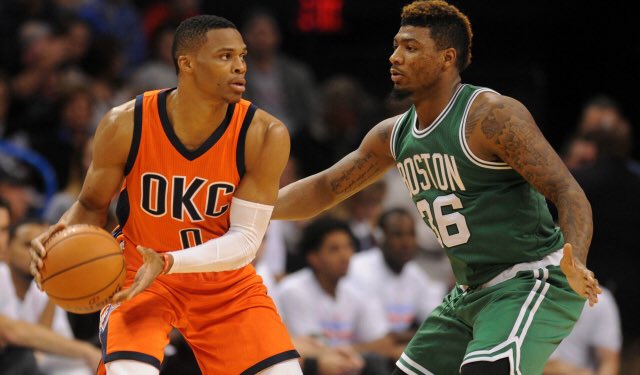 With Isaiah Thomas still out for the Celtics, the team put up a good fight and led for most of the game but they ultimately couldn't stop Russell Westbrook as they lose a tough one to OKC, 99-96.

In the second half, both teams improved offensively and the three point shot started to fall for Boston. Al Horford got the three stroke going and had two threes in the quarter. For the most part, Boston led in the quarter until the last half of the third where OKC started getting themselves back into the game. Steven Adams and Enes Kanter took the ball inside and got some easy buckets to go in the post for OKC. Westbrook also continued his explosive game and started to get the ball to the rack more against the Cels defense. Both teams scored 28 points in the period and Boston went into the fourth with a 71-67 lead.

In the 4th, the Celts started out with some tremendous ball movement and took the ball inside where they found success. The green team found themselves up by 7, 80-73 with about 9 minutes left. Marcus Smart put on quite the display of passing as he took the helm as the point man for the Cs. After trading buckets for most of the game again, it came down to the wire and Avery Bradley hit some big shots for Boston. After a quick two pointer, Westbrook went down and shot a three to tie the game at 92-92 with less than 3 minutes left. Marcus Smart then drove the rack and tried to get a layup and missed but AB was there to get the miss and laid it in for a bucket putting Boston up 94-92. After a Bradley steal, the Celtics tried to go up by two scores and couldn't. Westbrook took the ball to the hole and tied the game up at 94 all with just over a minute to go.

Both teams couldn't make their next shots and after an Al Horford turnover, OKC had the ball with under 40 seconds left with a chance to take the lead. Westbrook took control of the ball and went right to the cup and laid it in with ease to give the Thunder a 96-94 lead with 30 seconds left in the game. Boston called Bradley's number again and he couldn't get a basket to go in and as Westbrook came skying in for a rebound, Bradley forced a jump ball. Unfortunately for Boston, they lost the jump ball and a wide open Jerami Grant was found underneath the basket for a dunk to put OKC up by four, 98-94. The Celtics got back within two after Smart took a missed layup and laid it back up and in. Westbrook was fouled and missed his second free throw which gave Boston a chance to tie it but Smart's prayer at the end of the game wouldn't fall through and the Celts lost a tough one in Oklahoma City.

Boston now moves to 13-11 and now fly to San Antonio to take on the Spurs on Wednesday night at 9:30pm E/T. The game is scheduled to be televised on ESPN and hopefully the Celts can bounce back.