Sustained Excellence: Blocked shots, a quadruple double & the Old Bailey – Howell, that is 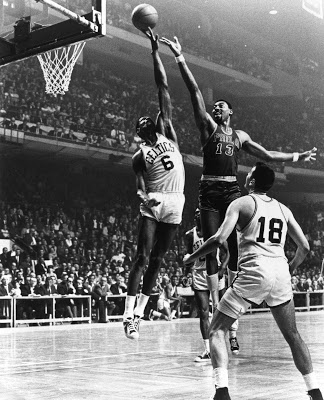 
Before there was even such a thing as a Triple Double – and with all due respect to the great Oscar Robertson – Wilt Chamberlain was inventing new ways to get one.

On the heels of the Philadelphia 76ers first defeat of the season three nights earlier in Boston, Wilt chose to perform as the Big Deterrent rather than the Big Dipper on the Big Stage of Madison Square Garden. In the opener of an NBA doubleheader against Detroit, Wilt posted a modest 18 points (on 8-for-13 shooting) and four assists. But the Big Guy cleared the boards to the tune of 24 rebounds, and – according to the AP’s summary of that Election Night’s play – registered 17 blocked shots.

It’s unclear just who was doing the registering – my guess would be long-time Philly publicist Harvey Pollack – since the NBA would not confer official “stat-hood” upon the blocked shot for another seven years.

You gotta figure that the notion of preventing a score by misdirecting an attempt must have entered the mind of a player or two from the earliest days of the sport – there was somebody who thought the blocked shot could be an effective defensive strategy, right?

Funny that “Put a hand in his face!” became a coaching mantra. Distracting the shooter’s view of his target is a whole different concept, isn’t it?

A good many coaches back then frowned upon the blocked shot as a defensive tactic, considered the risk of a foul too great.

But a new kind of athlete had already arrived on the scene – and the Hoops Horizon forecast a lot more of them on the way. Bill Russell was a champion high jumper in his school days, and there are some who feel that Chamberlain had the goods to become the best decathlete the sport of track and field COULD ever know.

It wasn’t just the emergence of the black athlete, either. There’s a good reason they called Billy Cunningham “The Kangaroo Kid.”

And while there have been a ton of dudes through the years who could “soar” – all the way back to Elgin Baylor – the quickest, most explosive leaper I’ve ever seen was a vintage, MVP-level Dave Cowens, who be elevating a second time before some guys could get off the floor at all. 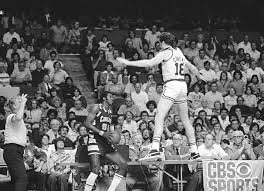 A player like this could wait for the shot to be released, then go up and re-direct the ball … in those times, anything less than flagrant contact with the shooter after release was certain to be deemed incidental and not penalized (unlike in today’s game where the jump shooter is “protected” through his return to the floor).

All this shot-blocking was beginning to draw the attention of those who were reporting on the games. Newspaper accounts, journals like Sports Illustrated, subsequently the sports literature chronicling the era would reference the impact of the maneuver, mostly in general terms (“numerous” or “several”) though occasionally with specificity like Wilt’s 17 swats against the Pistons.

The Frank McGuire coaching approach five seasons before had made Chamberlain into a monster scorer. On Alex Hannum’s watch with the Sixers, Wilt was stuffing the whole stat sheet.

He would usher the Big O from the ’67 playoffs with 16 points, 30 rebounds and 19 assists (which tied Bob Cousy’s playoff record).

In a regular-season game the following year, he scored 21 points, snared 25 rebounds, and handed out 22 assists.

And feast your eyes on these numbers from Game 1 of the 1967 Eastern Division Final.

But we’re getting way ahead of ourselves here – it’s early November and the Russell crew is fresh off an 18-point victory over this new “New Wilt." 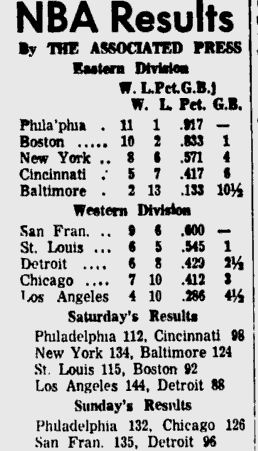 While Chamberlain was hosting his Tuesday night Block Party at MSG, Russell’s 26 rebounds and Bailey Howell’s 25 points spearheaded Boston’s third Bull blitzing of the young season. Two nights later in Cincinnati, Howell’s 3-point-play in the closing seconds of overtime secured a 113-112 win over Robertson’s Royals, and the good ol’ Southern boy had another 20 left in his tank the next night in the Garden, a rather formulaic 111-106 dispatching of the Knicks.

The rugged stretch of schedule – four games in five nights, about 3,000 miles of commercial air travel – caught up with the champs in St. Louis on Saturday. The Celts never dug their way out of a 20-point, first-quarter hole – local boy Toby Kimball even got some run.

When “Wilty,” as he liked to refer to himself according to teammate Hot Rod Hundley, joined the NBA in 1959, his “greeting” from opponents was hardly friendly. The physical abuse of Chamberlain is well-documented – from teammates, opponents, coaches, even game officials.

On a more subtle level, Coach Red Auerbach and his Celtic squad welcomed young Mr. Chamberlain to the Association by (a) posting a new record for regular-season victories with 59, and (b) becoming only the second team in league history – Mikan’s Minneapolis Lakers the other – to successfully defend a championship.

Wilty was able to gain a measure of personal satisfaction on both of those fronts while his team was losing the 1964 NBA Finals.

One of the most egregious Wilt abusers had been the Hawks’ Clyde Lovellette, now serving as Russell’s back-up. In the late stages of one blowout in what was a pretty lop-sided series, Lovellette thought it might be amusing to rough up the Big Guy.

Bad idea! One punch had Big Clyde on his ass, seein’ stars, and ready for a new line of work.

A new gig arrived on Nov. 8, 1966. Clyde Lovellette was elected Sheriff of Vigo (IN) County, defeating some other ex-jock who’d briefly pitched in the majors.