This recurring segment will provide a brief (sometimes very brief) analysis of the opponent, look at ways how the game can go, predict a winner and dive into Vegas spreads and then some throughout the season.

Recap: So we had an abysmal rebounding performance against the Bulls, Isaiah Thomas's FT% was worse than Wade and Rondo's combined 3-point %, and we still made it close. And then Avery Bradley turned into Ray Allen (who has just "retired" after not playing basketball for 2.5 years, please dude. Yes I'm still bitter about him leaving to go to the enemy. Right, KG?) so that we could beat the Hornets, who weren't supposed to be that good this year but are indeed good maybe? Man, is it hard to read teams in the beginning of the season.

Who are the favorites tonight and why?: The Celtics, because we are playing at home and all our injured players save for Kelly Olynyk are expected to play tonight. 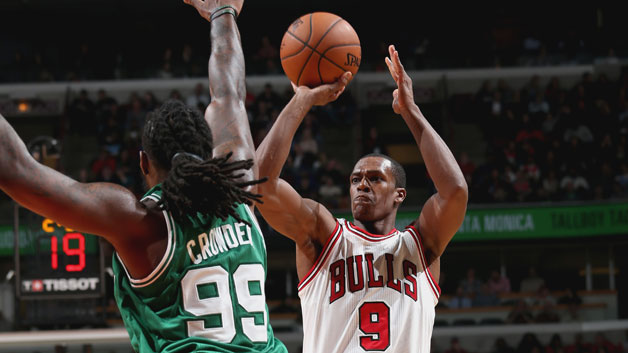 How can the Bulls beat us?: Well, they have already done so once. They are also 3-0, and not because their schedule was easy as they also beat the Pacers (who have not started the season well, but still). Chicago Bulls have the best Offensive Rating in the NBA with 114.7. They also have the 6th best Defensive Rating with 97.0. So in both regards they have performed better than us. They are also the best rebounding team (but that's partly because they have smashed us into pieces last week so small sample size effect, but still it was us whom they've smashed, so...) They are the 8th team with the most contested 2-point shots, so if we're dry again from beyond the arc things might get rough for us. They are effective in transition (5th in eFG%) and have very good PnR roll men.

Who will win the Tommy Award?: Marcus Smart. See below.

Who wins against the spread?: I'm picking Chicago +3.5, but I'm not so confident about it. The crucial question for the Celtics is this: Have we worked on our defense enough in the past few rest days, and is the return of Smart going to change things? (I surely hope so.) If so, we'll have a better shot at beating them. Or maybe the Bulls cool off because they have been outplaying the expectations so far. Maybe Bradley's shoulder discomfort isn't such a big deal. Nor Horford's recent recovery from an illness. (UPDATE: And he's out due to a concussion.) But I'm leaning towards another very close game tonight. We'll see. (My record so far: 1*-2)

If you disagree with my analysis and think I'm stupid or would like to read more of my scorching hot takes, you can find me on Twitter. You can read my other CelticsLife posts here.