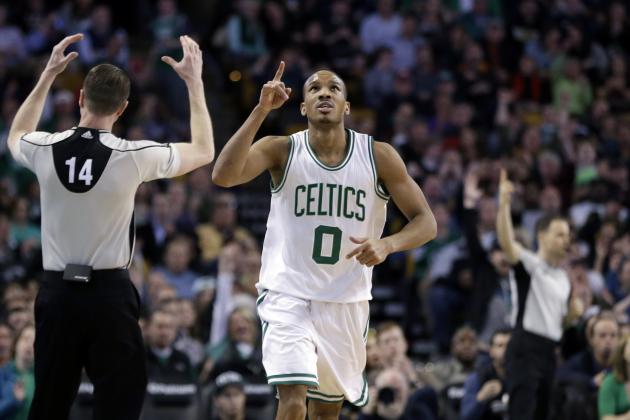 All aboard the Avery Bradley hype train!

Avery Bradley has, by all accounts, been the Boston Celtics best all-around player this season and the NBA has taken certainly notice. Bradley was nominated for the Eastern Conference Player of the Week award which spanned from October 25th to the 30th. Unfortunately, the award went to some guy named LeBron James but that shouldn't take away from what has been an incredible start to the 2016-2017 season for the sixth-year guard.

Through three games Bradley is averaging 21.3 points, 8.7 rebounds and 4.7 assists per game. If Player Efficiency Ratings (PER) are your thing, Bradley is rated at 23.04 which stands head-to-head with the PER's of players such as Kyrie Irving, fellow teammate Isaiah Thomas and Portland's C.J. McCollum.

After admitting that he's seeing the game differently and is taking full advantage of his skills, Bradley has almost looked like a brand-new player. Boston faithfuls will be adamant that they figured Bradley had this untapped potential in him all along but it's great to see that potential just maybe finally translating onto an NBA court at full force.

Avery Bradley spent part of his summer working out with @ATTACKATHLETICS with focus on playmaking. Has team best 11 assists through 2 games.
— Chris Forsberg (@ESPNForsberg) October 8, 2016

Why is Avery Bradley rebounding at such a high level? He says he realized he could do more to help his team win, and now he's doing it.
— Boston Celtics (@celtics) October 30, 2016


The guard surpassed the 30-point threshold for only the third time in his career against the Charlotte Hornets and made a career best eight 3-point shots. Granted, it would be hard to keep this level of play up but Bradley seem to be extremely confident that this might just be his year.


Avery Bradley said he understood he could do more as a playmaker and rebounder: "And that’s what I’m going to be doing this entire year."
— Jay King (@ByJayKing) October 30, 2016


Bradley was deservedly selected to his first NBA All-Defensive team this offseason, but if he keeps up this pace there's no reason to think he won't be running up the court at his first All-Star game.

Keep it up, Avery.


Everyone aboard the Avery Bradley hype train, thank you for riding with us. We're hoping to safely arrive at our destination - the NBA All-Star game in beautiful New Orleans, Louisiana. But by the looks of it, we might just finally make it.