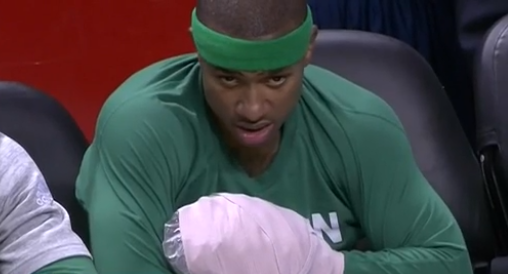 Sometimes, you realize just how thin the thread is between a fifty-win season and disaster.

That moment came for Celtics fans in the third quarter of Thursday night’s preseason matchup with the Charlotte Hornets when Isaiah Thomas collided with Roy Hibbert as he tried to fight through a screen. Though the injury appears to be a minor one with Thomas making light of it after the game, it’s safe to say more than a few hearts were in the throats of Celtics fans.


With a rash of injuries already affecting several teams around the league before the season even starts in earnest, the sight of the All-Star point guard on the sidelines with a massive wrap around his hand was not the image most of us had in mind when thinking of how this squad will play into regular season form.

Thomas had been having an excellent outing before the injury, scoring 15 points on five of ten shooting including hitting three of six from deep over just twenty minutes. Isaiah also managed to dole out five assists with just one turnover, registering a perfect two-for-two from the charity stripe.

It seems Boston dodged a bullet, but it’s worth noting that Thomas is no stranger to wrist injuries. While Isaiah seems confident he won’t be missing games, it’s probable Terry Rozier, Marcus Smart, and Demetrius Jackson see more floor time at point guard over the next few games, just to be safe.