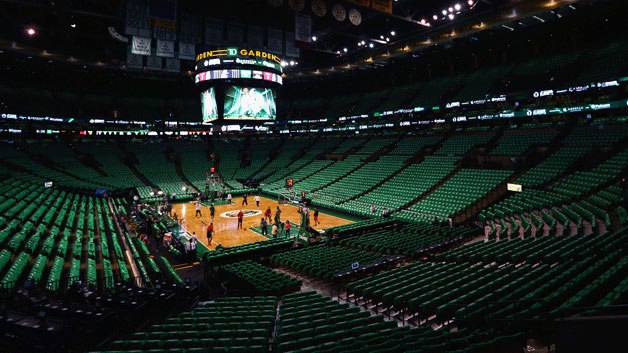 With preseason just around the corner for the Celtics, season ticket holders were allowed into the TD Garden on Friday night to see how the team is progressing since the beginning of training camp.

During the intrasquad scrimmage, Boston’s 20-man training camp roster was split into two teams, giving every player a chance to stake their claim to a significant role in Brad Stevens’ rotation. The supposed starters (Isaiah Thomas, Avery Bradley, Jae Crowder, Amir Johnson and Al Horford) for the forthcoming season wore green jerseys, while the second unit were in white.

The white team gave their counterparts a run for their money, to say the least. The green team was beaten in the first ten-minute game on Friday and it seems as though that wasn’t a great surprise to anyone within the organization.

While providing commentary for the TV broadcast, Celtics GM Danny Ainge revealed that the team’s starters have also been consistently beaten by their reserves in practice.

Source told me today that the C's second unit has been beating their first unit on a regular basis in prac. That group currently leads 27-22

Ainge just said the back-up team has beaten the starters three times in a row. START THE SECOND UNIT.

Danny Ainge said he expects Green (starters) to come out angry after having been beaten by the white team twice in scrimmages.

It may be a concern to some Celtics fans that the starters have struggled to show blatant superiority over the white team, but many share a more positive outlook. The lack of a massive gulf in talent between the two teams is a testament to the extensive depth of Boston’s roster heading into the 2016-2017 season.

With the impressive displays of the white team, led by Terry Rozier and Marcus Smart, it will be interesting to see if there are any significant changes made to the rotation as the season draws closer.