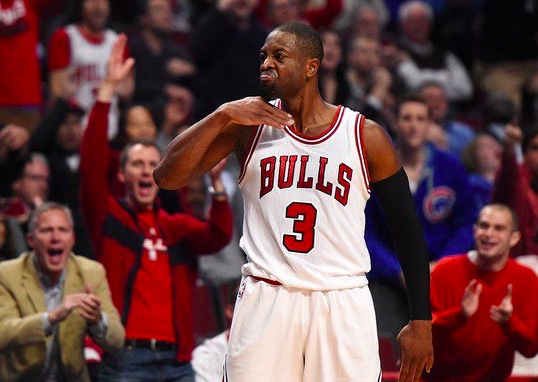 With Marcus Smart (ankle), Kelly Olynyk (shoulder), and R.J. Hunter (awaiting signing) out for the first tilt of the year between the Chicago Bulls and Boston Celtics, we missed out on an added layer of drama for the start of the Dwyane Wade - Rajon Rondo era in Chicago, compounded by an awkward start caused by difficulties with the game clock. A quick two by Wade and a Rondo steal leading to free throws for Robin Lopez set momentum towards the Bulls once the clock problems were sorted.

#Celtics frustrated on defense... And rightfully so. Isaiah Thomas had some words for Tyler Zeller after #Bulls last possession.
— Abby Chin (@tvabby) October 28, 2016

Defense continued to be a problem for Boston early, as Taj Gibson was able to score at will. Ball control was also an issue, with two turnovers in the first seven minutes as Al Horford and Isaiah Thomas struggled to get the offense moving. Boston's poor start resulted in a 22 - 8 hole before Avery Bradley chased down a transition basket that became a Thomas hook shot on the other end. Still, Chicago's unexpected success from deep continued their hot start.

A steal by Thomas and an early substitution to insert Jaylen Brown and Terry Rozier to try to contain the Bulls slowed the bleeding. Fresh legs pulled the Celtics within nine at the end of the first quarter, with Wade narrowly missing a backwards dunk at the buzzer.

The second quarter started with a layup by Bradley, and Rozier and Wade trading threes before Nikola Mirotic and Amir Johnson got on the board with some midrange buckets. Jonas Jerebko drained a three, cutting the Bulls' lead to 41-34, and baskets by Gerald Green and Horford plus a layup by Bradley cut the lead to three, with the Celts rediscovery of defensive intensity - including an impressive stuff on Jimmy Butler by Bradley - aiding their run.

A crafty feint by Jae Crowder leading to free throws got Boston within three, until Wade connected on his third trey of the night, defying expectations. Shortly after, a mid-court collision nearly turned into an altercation after Butler refused Crowder's hand up, and Thomas and Rondo started jawing.

Crowder and Butler, Marquette teammates, get into it and then Thomas and Rondo join in. A typtical NBA shoving match. #Celtics #Bulls
— gary washburn (@GwashburnGlobe) October 28, 2016

A review of the play resulted in an offensive foul on Crowder, and a pair of double technical fouls for Thomas and Rondo and Butler and Crowder, testifying to the chippy feel the game had at the end of the half. The Bulls and Celts traded buckets until a three-second violation by Gibson and a steal and layup by Thomas pulled Boston back to a five-point deficit, which was immediately pushed back to a 57-49 lead for the Bulls after Butler closed the half with a three.

Both teams looked tired to start the third, with several missed shots and offensive fouls being traded back and forth. Coach Brad Stevens was uncharacteristically animated at the officiating, yelling repeatedly from the sidelines at calls. A buzzer-beater by Tyler Zeller ended up being waived off after review, but he redeemed himself connecting a layup off a Horford pass moments later.

The physicality continued, with hustle plays and gritty defense sparking a run for the Celts after sloppy play by the Bulls, capped by a Thomas 17-footer pulling Boston to within one. Zeller's dedication kept Boston close as Gibson and Butler drew quick fouls, leading to a Rozier steal and Thomas three for Boston's first lead of the night. It didn't last long though, as Butler answered with a trey of his own, followed by a quick Mirotic two.

Johnson broke the Bulls' rhythm with a pair of deflections, and a series of ugly plays highlighted both teams' fatigue, with lots of missed shots and almost no defensive rebounding by Boston, resulting in a 14-2 advantage for the Bulls at the end of the third.

A quick and-one by Wade was answered by a three from Rozier to start the fourth, but the Bulls managed to hang on early in the quarter. More acrobatics by Brown got a small run started and triggered another outburst from Coach Stevens, but defensive lapses covering the second-newest Bull Michael Carter-Williams and Doug McDermott pushed the lead back to 12 with 7:37 left. Brown, Bradley and especially Thomas kept Boston in striking distance with 4:32 left, at 95-90 Bulls.

Thomas continued to struggle at the line in the final minutes, though clutch free throws by Crowder pulled Boston to within two, but a missed three by Horford followed by a foul by Jae let Butler put the Bulls up by four with a minute to go. He quickly redeemed himself with two from the charity stripe after Gibson fouled, but a Brown travel and another Wade three quickly stopped Boston's run.

Wade continued to drive a dagger into Boston's hopes by blocking a three-point attempt by Green, forcing the Celts to send Butler to the line. It was over from there, with Boston having no answer for the unexpectedly sharp-shooting new-look Bulls.

The Celtics next face the Charlotte Hornets at home this Saturday, October 29, at 7 PM EST.