Ian Levy of Nylon Calculus recently published a deep dive into last season’s numbers to see how this year’s squad - particularly with the addition of veteran big man Al Horford - might fare this coming season with three-point shooting. Consistent offensive options were few and far between last season apart from Isaiah Thomas, most glaringly in the playoffs, thanks in no small part to Horford’s former team, the Atlanta Hawks.

Levy notes that much of the strengths of last year’s team can be attributed to their “fast-offense, slow-defense” approach, which requires a fair amount of energy to maintain on both ends of the court. Among league leaders in both offensive pace and defensive efficiency, they were still unable to translate these characteristics into a successful postseason run due to one glaring issue - and as you have probably guessed, that issue would be shooting.

7 in the first quarter and 28 in the half, are the fewest points scored by the Boston Celtics in a playoff game.


Teams were able to swarm Thomas effectively on defense last season, especially once Avery Bradley and Kelly Olynyk went down, two of the teams' only other consistent offensive shooting options. Rightly so, Levy points out that Horford’s defection to Boston creates a defensive gravity capable of taking pressure off of Thomas for more open looks (particularly given his passing capabilities - he was third in the NBA in assists per game), pointing out that while the Celts were eleventh in three-point attempts per game, they were third-to-last in the league in three-point percentage. To translate: Boston couldn't hit a three to save its life when Thomas was double- (or triple-) teamed last year, and it wasn't for lack of trying.

Levy’s analysis becomes particularly interesting near its end, where a breakdown of Horford’s passing suggests the midrange (the area between the paint and three-point scoring arc) may prove especially fruitful space for Boston’s roster to create offense. This, in turn, may further aid the outside shooters, making the team especially difficult to guard. The thought is tantalizing for Boston fans, especially given the lack of attention the midrange game has had in recent years.

So, who are Boston’s outside shooting options, save the obvious answers in Thomas and Horford? Who could emerge as a midrange threat to compliment the spacing and passing Levy discusses? Let’s take a look: 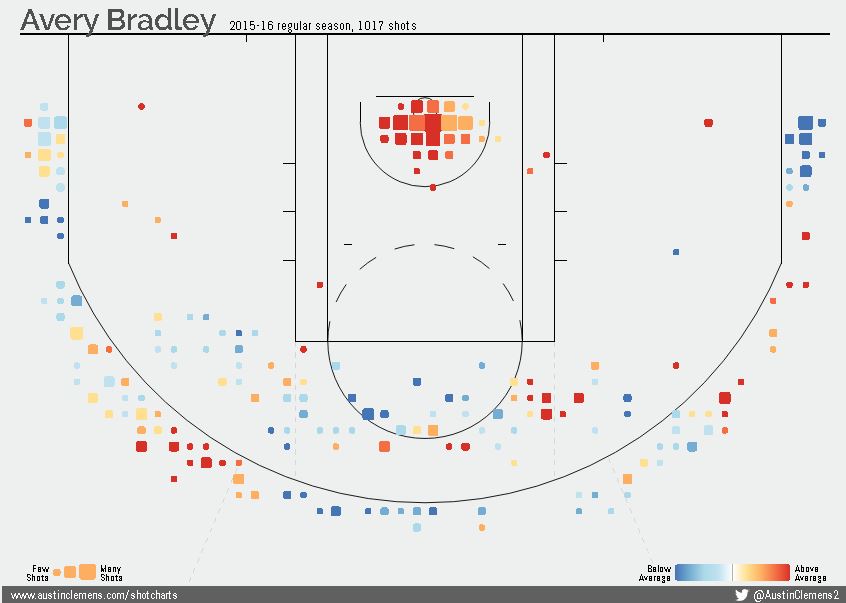 Avery Bradley’s offensive development has, unsurprisingly, placed him at the top of the list as both a long- and mid-range option, with his greatest success last season coming from the wing beyond the arc, and near the right elbow from within. He also had considerable success shooting near the basket, which may prove even more successful with the spacing Horford supplies. It’s worth noting that too many players making their buckets in this easy-to-defend location can quickly turn a strength into a liability - it’s in Boston’s best interest to reserve shots near the restricted area for players who have less success further from the basket. 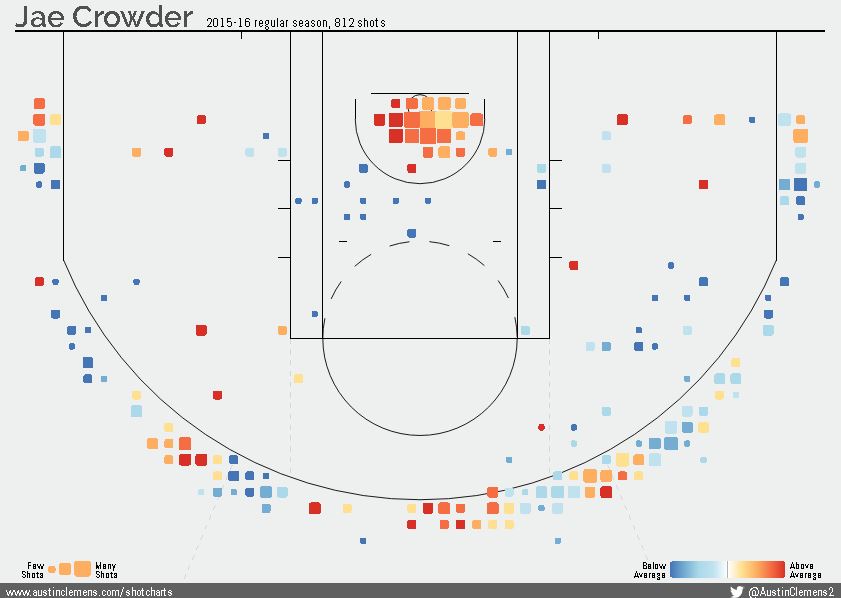 Jae Crowder was solid from deep last season (.336), though there’s certainly room for improvement. Crowder’s best locations were near the top of the key and around the corners, though he was a competent shooter inside the arc near the block - if he can’t get his three point stroke going, this might be another option per Levy’s analysis. Like Bradley, he was excellent around the restricted area, but this isn’t unexpected given Jae’s tendency to play closer to a four on offense. 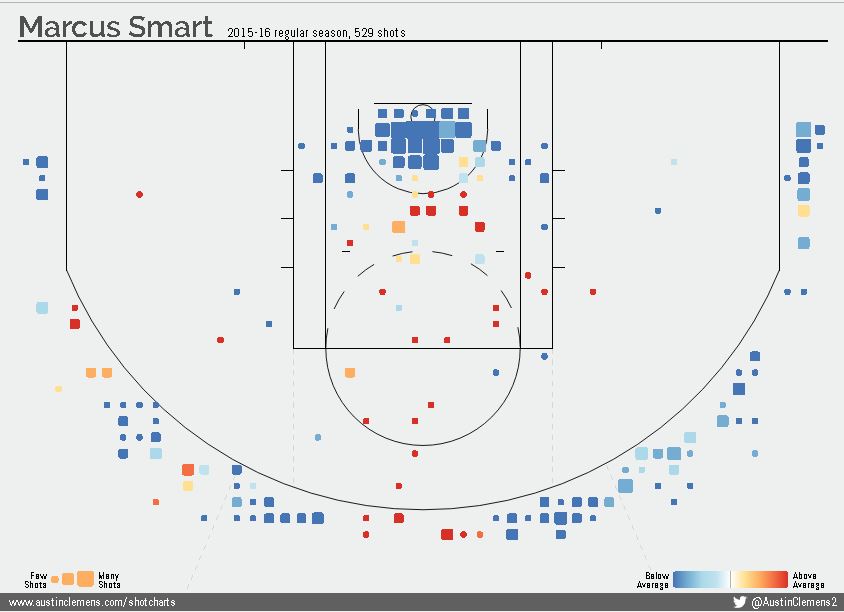 Marcus Smart’s historically bad shooting woes don’t lend him to most conversations on how Boston might augment its offense this season, given he’s got to get the ball to go in at all at this point. However, a closer look at his shot selection suggests his midrange game might thrive in a system featuring Horford. While Smart was downright terrible near the rim, he was quite effective closer to the free throw line out to the key, and to a lesser extent, near the left wing. Smart should focus on getting his points there, and ask himself if he is on the left or center before choosing to let a three fly - at least until he gets near league average. 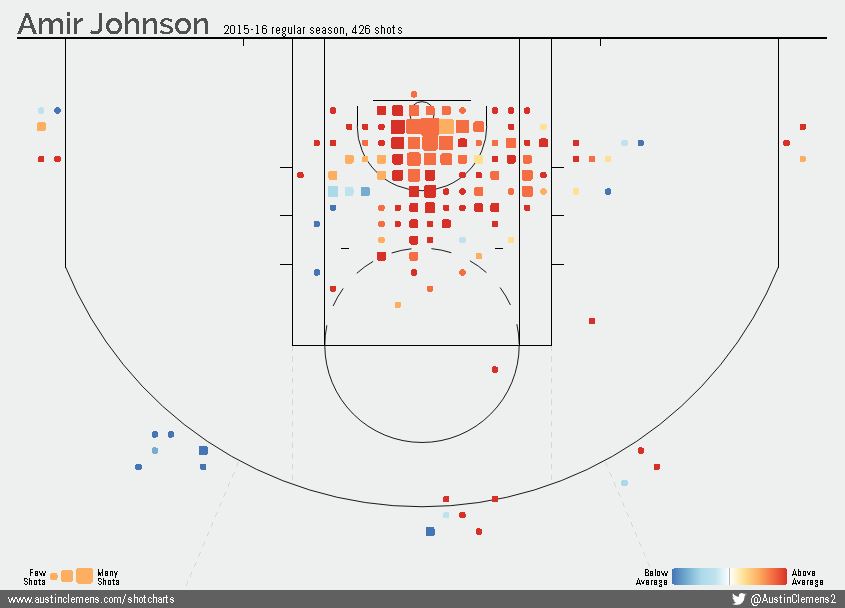 Amir Johnson is adept at midrange shooting, and while the bulk of his shots come from the restricted area, he’s one of the best on the team from further out in the paint. He also shows a very solid stroke from either corner, hitting a combined 50% on ten attempts combined. While this is definitely too small a sample size to make much of, it’s worth exploring early in the season. If it’s something that can be scaled up, it could make Boston a very dangerous team - and it looks like Amir is already working on his shot (OK, not really). 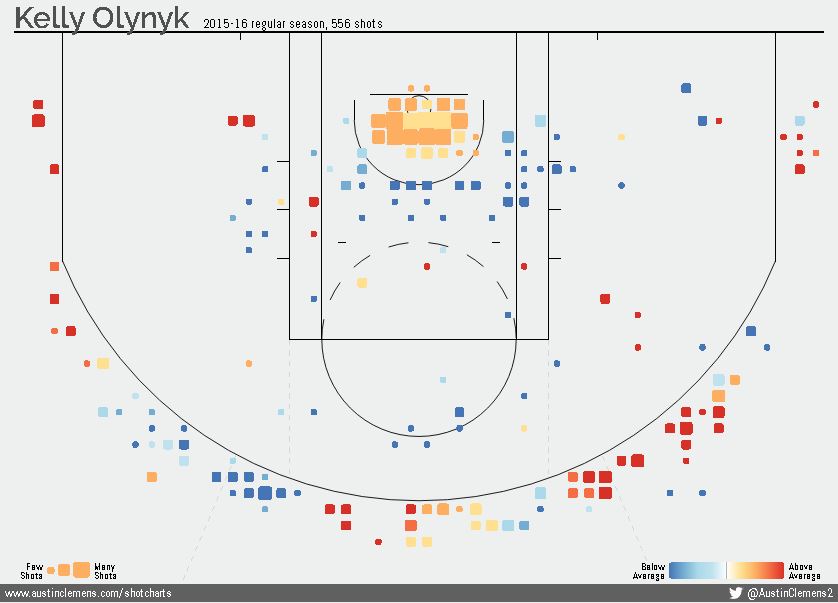 Kelly Olynyk was, as you might guess, one of the Celtics most reliable shooters from deep last year - when he was healthy, anyhow. Perhaps over-reliant on his effective pump-fake drives to the basket given the spacing last year’s squad dealt with, Olynyk should let it fly from the top of the key and corners whenever possible. The area on both sides of the arc by the right wing might be especially good for turning some of those patented pump-fakes into actual shots, too. 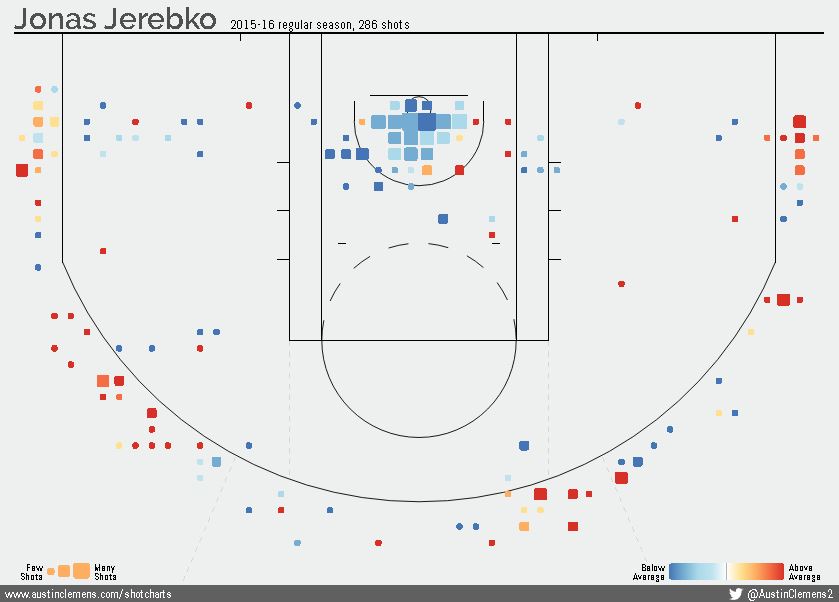 Jonas Jerebko makes his money on the left wing. Shooting 48% from deep on this part of the court, Jerebko should continue focusing his offense there and in the corners - and, to a lesser extent, to the right of the key - where he’s solidly above league average from three, particularly given his low (46%) rate for converting near basket attempts, especially for a forward. Boston's second-best three-point shooter overall last year will be an important part of this season's offense. 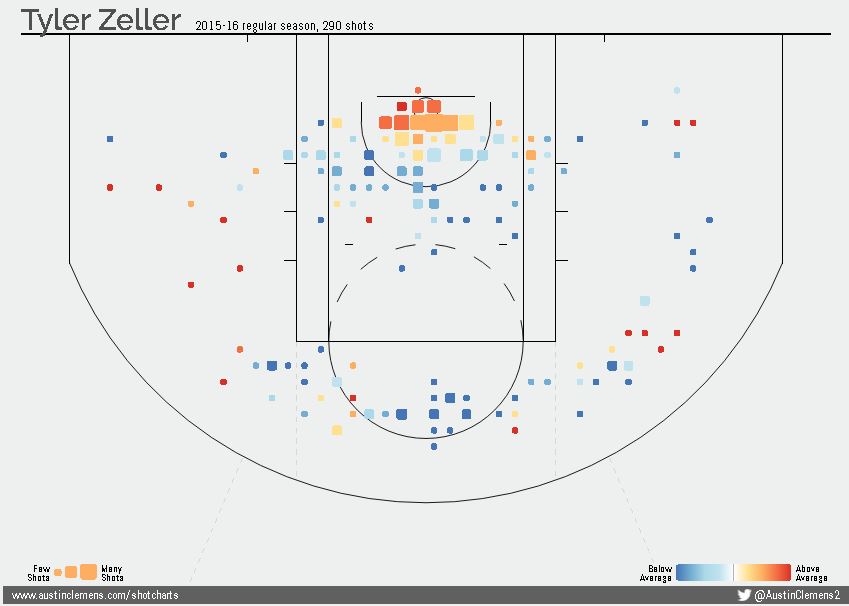 Tyler Zeller might not surprise many with his reliance on near-basket attempts (well over half his attempts came in this area, which he converted to a respectable 54% success rate), but he also has an effective midrange game that should dovetail nicely with Smart’s. Zeller shot 50 and 40 percent from the left and right elbows respectively, and .380 from close to the left block. There's also been rumblings he is working on adding three point shooting - but before we get too excited, let's keep in mind he made precisely zero attempts last season from deep - and just five (all duds) in his career.

A pairing of Zeller, Smart and any of Boston’s other three-point options (Thomas, Horford, Olynyk, and possibly Jerebko) may create a surprisingly potent offense worthy of complimenting their already fearsome defense. Of the Celtics most glaring deficiencies from last season (shooting and rebounding), it seems there may be a blueprint in place to address the former with the players on the roster. However, it remains to be seen how the team handles rebounding this year, particularly in the wake of Jared Sullinger's departure. Still, a combination of a quick and versatile high-scoring offense along with a grinding, slow defense two units deep may more than make up for a lack of presence on the boards. How it all plays out will start to take shape tomorrow night, when they face the Philadelphia 76ers in their first preseason matchup of the year.