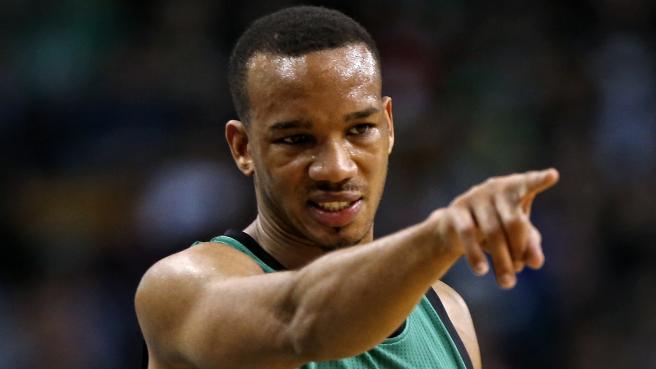 Avery Bradley might just be our next great floor general.

Let me just start right out by stomping on the breaks a little on an idea most have long ago given up on (Bradley at the one). Two preseason games is by no means a reliable indicator of what the coming season will look like for anyone on the Celtics. But there’s more to Bradley’s recent jump in assists - he’s averaging 5.5 per game over that stretch, double his average last season - than just luck. He’s been working on his facilitation in much the same way he came into the league, focusing on defense almost to the exclusion of other elements of his game, then adding a surprisingly efficient offense to his repertoire. Now distribution and team defense have been his focus over the summer, positioning Avery to become a breakout star and the two-way player he’s been aspiring to be for some time.


While it might come as a surprise Bradley has not historically been an especially adept team defender, he has also been working on this aspect of his game to raise it to the level of his individual defense, known for being capable of shutting down even an occasional Stephen Curry offensive outburst, garnering league-wide respect from his peers.

His reputation around the association as a shutdown defender did not escape the attention of NBA sports media, either, who voted him All-NBA First Team Defense this past season, an honor shared by Draymond Green, DeAndre Jordan, Kawhi Leonard and Chris Paul.

How to celebrate such an achievement? Work harder.

Bradley’s reputation as an relentless defender and competitor should make his equally relentless approach to training unsurprising, and a good match for former Michael Jordan, Kobe Bryant, and Dwyane Wade trainers, Attack Athletics, who ESPN’s Chris Forsberg reports Avery spent some of the offseason working with to improve his playmaking skills. While the sample size is small, the results hint at an exciting development which may make Boston's prized flexibility even more fluid.


Avery Bradley spent part of his summer working out with @ATTACKATHLETICS with focus on playmaking. Has team best 11 assists through 2 games.
— Chris Forsberg (@ESPNForsberg) October 8, 2016

As we saw last year, (and as we desperately missed in most of the post-season), Avery's newfound offensive capabilities were not only capable, but a vital component of the previous season's success. Even still, Bradley’s offense growth is still sinking in around the league - even among his teammates. As reported by the Worcester Telegram’s Scott Souza, Al Horford says:

"I knew he could shoot the ball … but he’s a much better shooter than I thought. He can really shoot the 3, pull-up, and he’s also a really good passer … You get so caught up in his defense, and how great he is defensively, that you lose sight of some of the things he can do on offense. I am just excited to be able to play with him because I feel like I will be able to get him open through screens, and handoffs, and he can shoot the ball."


Let’s hope he keeps taking people on other teams by surprise on the offensive end off the court, too. In the meantime, we have another five preseason games to get a taste for Bradley’s offseason growth, starting with Saturday’s tilt with the Charlotte Hornets. And with Isaiah Thomas’s most recent iteration of (hopefully minor) wrist troubles reminds us, it certainly doesn’t hurt to have options for moving the rock.