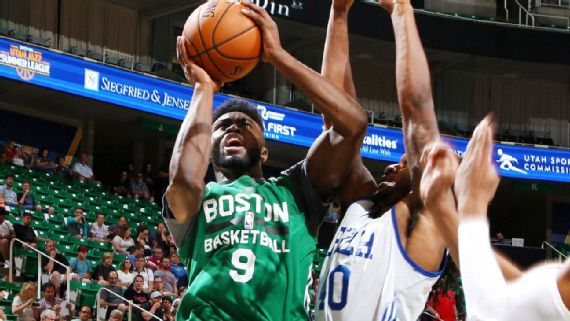 In an NBA.com Rookie Survey for the class of 2016-17, there were 38 rookies polled on 10 questions. Of those 10 questions, 8 related to how they viewed their classmates basketball skills. Jaylen Brown's name came up in 4 of them. Pretty decent showing for our freshest lotto pick.

The biggest sign of respect was Brown running away with the vote for Most Athletic. He received 38.7% of the vote, with the nearest competitor at 16.1%, in the L.A. Clippers Brice Johnson.

Brown didn't win any other categories, but he received votes of respect in "Best Rookie Defender", "Which Rookie Will Have The Best Career" (tied for 4th with Ben Simmons), and "Biggest Steal In The Draft", where he placed tied for 3rd. He also got a vote in "Which Rookie is the Funniest", meaning we may have an even better Evan Turner replacement than we thought.

So according to this year's rookie class, we got a steal in the draft with an athletic freak who can play D, will have a great career, and can make some people chuckle. Obviously we're looking at Blake Griffin at the minimum here folks. That's our floor. I don't know about you, but I trust these guys. Although, nobody thought he would win Rookie of the Year. Now I'm torn.