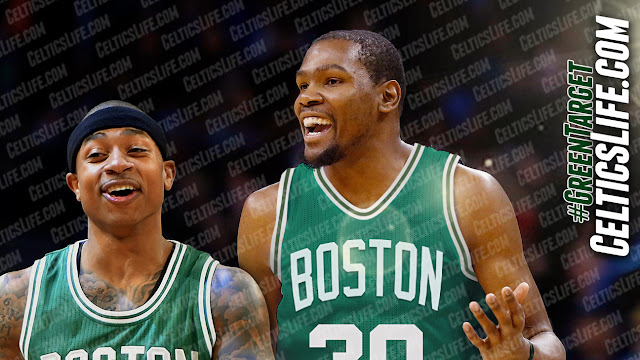 Kevin Durant just finished meeting with his fifth team, the Boston Celtics, in the Hamptons today as part of his free agency trip. He will meet with the Miami Heat to finish up his tour on Sunday, and then a decision looms. But for those that were expecting it to take a while, ESPN's Chris Broussard has a differing report:


Kevin Durant has told clubs he is meeting with that his decision will be made within the next 24-36 hours, according to league sources.
— Chris Broussard (@Chris_Broussard) July 3, 2016


Whether Durant will choose Boston remains to be seen, but the Clippers may have cut themselves off from KD by signing Austin Rivers to a $35 million deal. Plus the Heat have some questions marks with Dwyane Wade's discussions with the Milwaukee Bucks and New York Knicks heating up, and there hasn't been much grumbling about his impression of the Spurs. The only team that logically would have made serious gains with Durant should be the Celtics with their acquisition of Al Horford on Saturday night, after the four hour meeting just before.


One person with knowledge of the situation said the addition of Horford to the Celtics could play a part in Durant's decision, but it will not be an overriding factor.


Ultimately, no one knows what's going on in Kevin Durant's head right now, but maybe the Fourth of July will see Celtics fans celebrating another huge free agent signing.