Jimmy Butler to Boston Rumors: Now Minnesota is in the mix 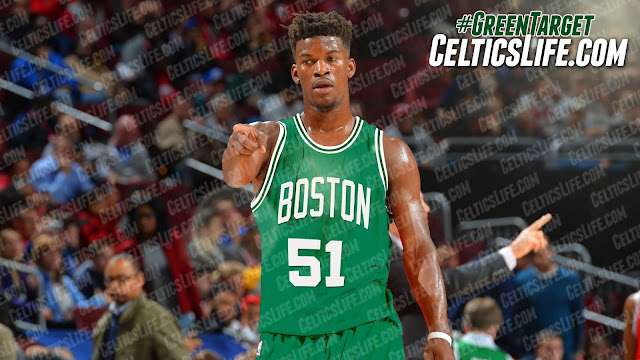 UPDATE: Details continue to stream in about what Chicago's asking price could be for Jimmy Butler. According to Darren Wolfson, that price is pretty steep:

If the Bulls are indeed requiring Andrew Wiggins as well as the No. 5 overall pick in next week's draft, in addition to the #3 overall pick Boston would presumably have to part with an additional major asset to stay in the mix for Jimmy Butler.

How much and how bad do we want this guy?

ORIGINAL: The rumors connecting Bulls All-Star Jimmy Butler to the Boston Celtics have been swirling since right before the trade deadline. They got a shot in the arm early this week as Minnesota is now allegedly making a push for the Chicago swingman.

This past season, Butler averaged 20.9 PPG, 5.3 RPG, and 4.8 APG. He also made his second appearance at the All-Star Game and was named to the All-Defensive second team for the third consecutive time.

As if his stats weren’t impressive enough, Butler’s current deal-- on which he is set to earn $18.7M per season over the next three years-- looks even better considering what the increase to the salary cap will do to newly signed deals.

At 26 years old and on a great contract for a player of his caliber, the Bulls could demand quite a bit for Butler-- the question is who are they going to demand it from?
Here is a peak at what a potential package from the now Thibs led Wolves could look like:

No. 5 + some combination of LaVine/Dieng/Shabazz would be a solid return for Butler. But I'd be surprised if it happened.
— Sean Highkin (@highkin) June 14, 2016

While that is a good offer any team is going to have a hard time outbidding Boston if they want to be in the Jimmy Butler business. A package of picks and pieces for Chicago’s inevitable rebuild is going to go a long way… probably longer than any package from Minnesota can cobble together without cannibalizing the chemistry the Young Wolves have spent the last two seasons building.