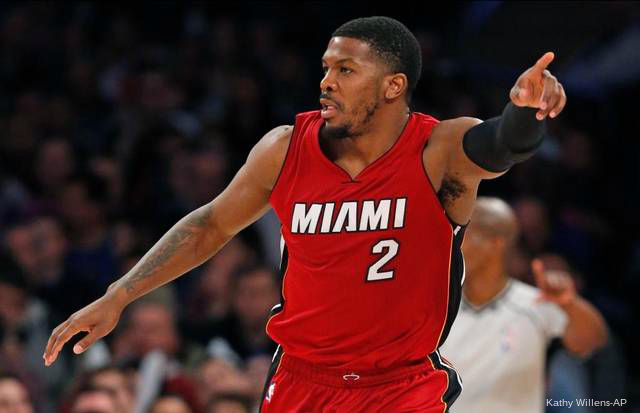 In late February when the Nets bought out Joe Johnson's contract and the Celtics were rumored to be on his list of potential new teams, I figured Johnson could possibly add a little scoring punch to Boston's bench.  However, I wasn't that concerned when the 34-year-old chose the Heat instead of the Celtics--finding minutes for him was going to be a major challenge on a squad that already went 10-deep when healthy.


The key phrase though, was "when healthy."  With injuries down the stretch to Avery Bradley, Jae Crowder and Kelly Olynyk, it turns out Johnson might've been exactly what Boston needed.

In the 24 regular season games he played with Miami, the Celtics' 2001 first-round draft pick averaged 13.4 points and 3.6 assists in 32.1 minutes per game, while shooting 52 percent from the floor and 42 percent from beyond the arc.  Johnson's production has fallen off slightly in the playoffs to this point (11.4 points and 2.8 assists in 34.8 minutes), but his shooting percentages--44% overall and 40% on threes--still look great compared to what the C's collectively did this postseason: 38.4% FG and 27.5% 3PT.  Ouch.


Celtics finish with the worst shooting performance out of any first round team in the postseason: 38.4 percent from the field.
— Brian Robb (@CelticsHub) April 29, 2016


Terry Rozier made great strides this year, but it's never a good sign when a rookie who hardly saw the court all season suddenly logs 19.8 minutes per game in the playoffs.  Boston's injury bug and subsequent lack of shooting got so bad that RJ Hunter even average 8.2 minutes in the six contests vs. Atlanta.

What if those 28 minutes from the rookie guards had instead gone to a playoff-tested, veteran clutch shooter like Johnson?  I can only imagine the long-time Hawk would've relished the opportunity to do battle with his former ballclub.