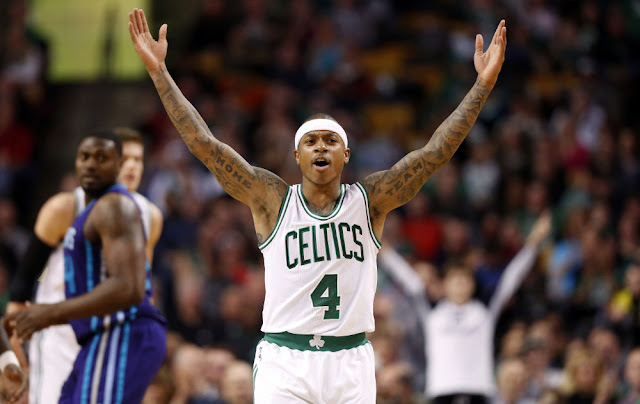 Isaiah enjoyed his first all-star season this year, and helped lead the Celtics to their 48-34 record. But after an early elimination from the playoffs, Thomas decided he didn't want to be away from the spotlight for too long.

If you've been watching the Raptors Cavaliers series, you've seen Isaiah at the desk before games and during halftime. Sage Steele, Jalen Rose, and Doug Collins have spent two nights with Thomas and he's seemed to be good luck for the Raptors as Toronto dismantled the Cavs each night Isaiah was in studio. But his stop in Bristol isn't the end of his time in the limelight.

Lots going on Friday. @Isaiah_Thomas will get the party started with the first pitch. Tix: https://t.co/a7VXfCpS9x pic.twitter.com/Y5TARfC161
— Seattle Mariners (@Mariners) May 24, 2016

That's right. Isaiah is headed back home to Washington state to throw the first pitch at the Mariners game tomorrow night. The green bullet, as I like to call him, was born in Washington, and played college basketball at the University of Washington. But after he throws out the first pitch for his hometown team, he's not headed back to New England right after... Instead he's hosting a Memorial Day weekend basketball tournament in Tacoma.

And there are some wicked names going to this tournament. His current and former teammates are going to support him, including Jared Sullinger, Evan Turner, and Terry Rozier from the C's, Eric Bledsoe and Archie Goodwin from the Phoenix Suns, and Ben McLemore from the Sacramento Kings. Other notable players attending will be Jamaal Crawford, Rodney Stuckey, and Tony Wroten (Wroten who defeated Isaiah's team in the tournament championship last year). When asked if he was surprised that so many of his former teammates and other players decided to participate, Isaiah had this to say, via Todd Milles in the News Tribune:


It is what I expect... Overall, I am generally a good person. My former teammates... say I was a pretty good dude. That is the way I am. Ever since I was on basketball teams, people have liked me — liked the way I play, and the way I lead.


The tournament will start on Saturday, and I'm hoping to see Sullinger, Rozier, Turner and IT to play on the same team.