Celtics No. 3 in ESPN Insider's future power rankings (next 3 years), maybe should even be No. 2? 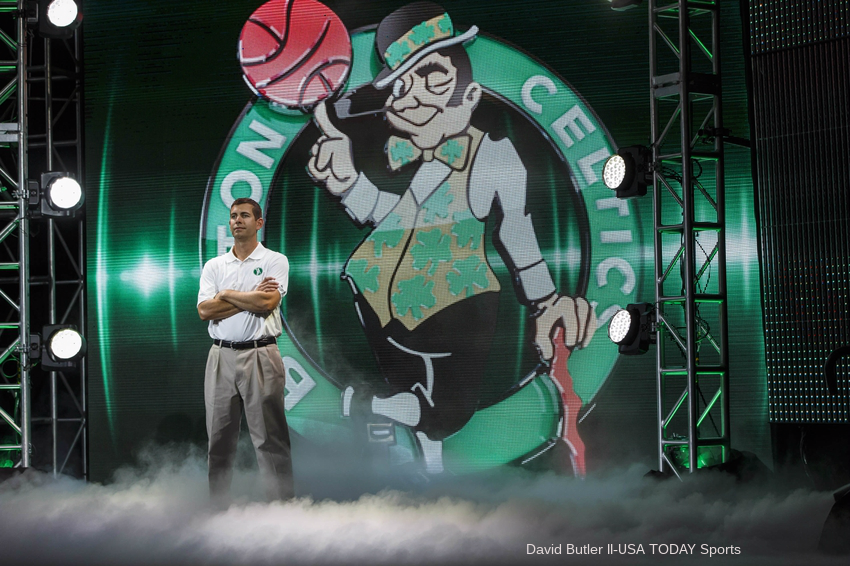 The Warriors (No. 1) have the two-time reigning MVP, not to mention the greatest pair of shooters the league has ever seen.  Cleveland (No. 2) has LeBron James.  What does Boston have?  Apparently enough to rank third out of 30 teams in terms of potential success over the next three years.  Here's what Chad Ford says about the No. 3 Celtics in ESPN Insider's "2016 NBA Future Power Rankings":

Boston continues to fly up the charts, moving from No. 10 to No. 3 in this latest iteration. Celtics GM Danny Ainge has put the team in a perfect position to make a major leap. They have a bounty of draft picks the next two years, major cap space, one of the best head coaches in the NBA and an intriguing group of young players that somehow managed to win 48 games this season.

Of course, the Celtics will have to make the most of all of those assets to earn this high a ranking. Looking at Ainge's track record in the past, it feels like a good bet. Ainge might be the best deal-maker in the league, with the possible exception of San Antonio's R.C. Buford. In short, no team is better positioned to be a challenger to the Cavs in the East for the next three seasons.


The Spurs are ranked No. 4, with the Thunder right behind them at No. 5.  It's fairly astounding that Boston managed to land in the middle of the top 5 along with the league's four best teams (two years ago the Celtics were 24th)--especially considering the C's are rated 15th in terms of players (pictured below in ESPN.com's graphic), the category that determines 50 percent of each franchise's total score.  "Management" and "Money" are worth 16.7 percent, while "Market" and "Draft" both count for 8.3 percent. 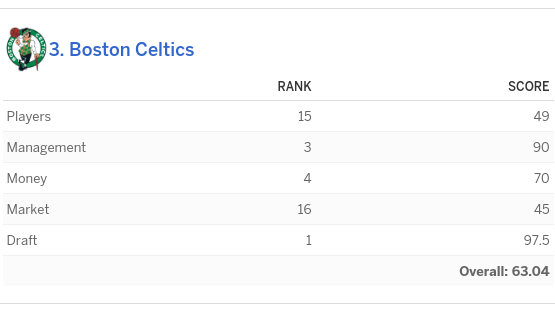 Looking at the above numbers, the immediate question that comes to mind is why does Boston have such a poor "Market" rating?  That ranking seems particularly skewed in comparison to the Cavaliers at No. 7.  Here's the description ESPN Insider gives for the "Market" category:


Is there anything about Cleveland that should really make it nine spots higher than Boston?  It wins on current team quality, sure, but it loses in most of the other criteria mentioned.

The Celtics final score of 63.04 was nearly good enough for second place, just behind the Cavs' 63.79.   If the "Market" numbers were evened out slightly, Boston could have the No. 2 position overall in the rankings.

Also worth noting, the Nets are dead last at No. 30 and are rated 30th in both the "Players" and "Draft" categories as well.  More good news for the C's, who can swap first-round picks with Brooklyn next year, and own the Nets' selection outright again in 2018.