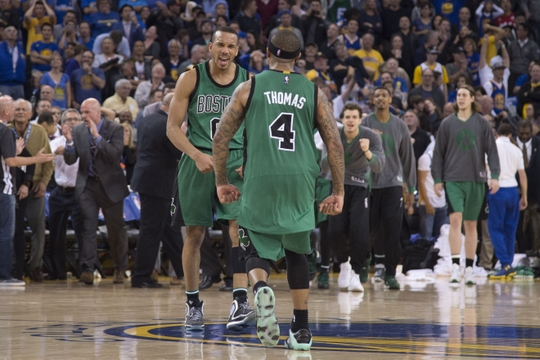 It would appear the Celtics have the best book in the NBA on defending Steph Curry. I say this fully realizing that the show he put on in the 3rd quarter was the stuff of legend, but the fact is that in the 2 matchups between the Celtics and the Warriors this year Curry has been VERY uncomfortable.


9 turnovers for Steph, a new season high, passing the 8 he had in Boston

Aside from causing more turnovers than any other opponent, the Celtics held Curry to 9-19 from the floor last night. If you combine that with the 9-27 he put up in their previous matchup, that puts him at 18-46 against the C's for the season, just 31% from the floor.

It helps that they can send Avery Bradley and Marcus Smart at him in waves, and last night they also mixed in some Isaiah Thomas. Those guards are as tenacious as any grouping in the league. The relentless level which Smart and Bradley attack at on the defensive end puts anyone they target in for a long night.


Steve Kerr: "I think Avery Bradley's as good an on-ball defender as their is in the league and Marcus Smart's right there with him."

Sure, that play ended in a Verajao layup, but you get the idea. Last night's game was unbeleivable. The Celtics did not flinch going up against the best team in the league, in the loudest arena in the league, with the crowd going wild, and with the whole country watching on ESPN. That's a great sign, and they certainly seem to be something of a matchup problem for Curry and the Warriors.


Meanwhile, double OT in Boston and the streak ender in Oakland. Maybe Celtics-Warriors is the NBA Finals we need.