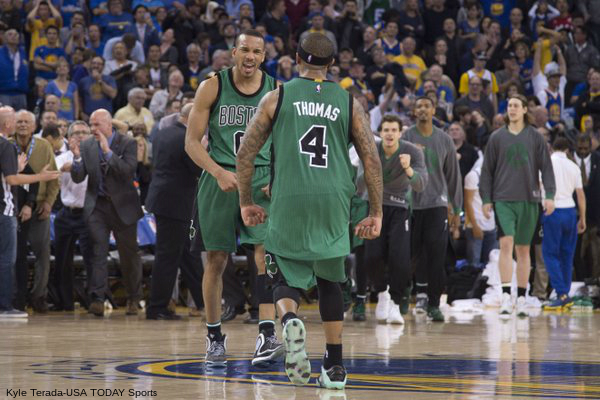 It's hard to argue last night's history-breaking 109-106 Celtics win at Golden State wasn't the best victory of Brad Stevens' tenure in Boston.  I'd also make the case that considering the time of the year and with all eyes around the league on the Warriors' epic run, it was likely the single biggest win the in the NBA this season.

No word on whether or not this Warriors fan has recovered yet:


Warriors fans react to their loss last night as if such an event was not possible pic.twitter.com/chaRMXLTKY
— Darren Rovell (@darrenrovell) April 2, 2016


After following up a scoreless first half with an 18-point third quarter, Isaiah gave credit to a new pair of shoes he put on at halftime:


Isaiah Thomas - 'Them other shoes didn't have any buckets in 'em' pic.twitter.com/aztCgAQ1CF
— Steve Kyler (@stevekylerNBA) April 2, 2016

"I switched my shoes. Them other shoes didn't have any buckets in them." - Isaiah Thomas https://t.co/cx4Y7Vjx1V
— SportsCenter (@SportsCenter) April 2, 2016


Best of all, watch Jae Crowder meet Isaiah in the tunnel after the final buzzer sounded: