T-Wolves owner says Kevin Garnett wants to play next season, does that mean another for Paul Pierce too? 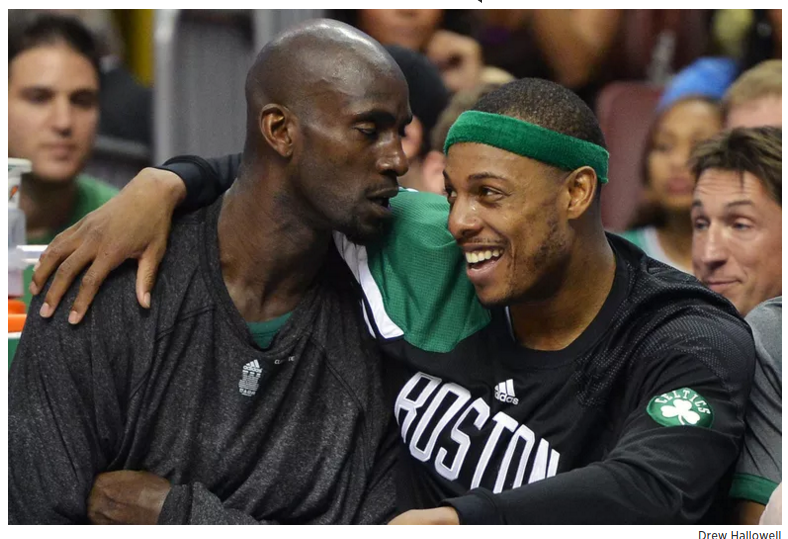 We made a big deal of Kevin Garnett's return to Boston back in December, and the future Hall-of-Famer certainly acted as if it would be his last.  However, there are recent indications that KG may not retire at season's end after all.

From Sid Hartman of the Minneapolis Star-Tribune on March 26:

Kevin Garnett has told team owner Glen Taylor that he would like to play in some more games, but his knees are not healthy enough. Still, Garnett will try to get in shape during the offseason, and then decide whether he will play the second year of his contract. If Garnett were to play next season, he would tie Kevin Willis for the most seasons played by an NBA player in the history of the game at 21.


The 39-year-old Garnett still has one year and $8 million remaining on the contract he signed with Minnesota last summer.

What does this have to do with Paul Pierce?  When the Celtics visited the Clippers last month, we speculated that it might be Pierce's final matchup with his old ballclub.  However, Pierce said at the time that his decision to call it quits might hinge on what long-time friend Garnett decides to do.

From the Boston Herald's Mark Murphy:

Much of his decision seems to be tied to how Kevin Garnett opts to handle his own future. The two often talked about retiring together, and Pierce admittedly will have a tough call to make if Garnett hangs up his size 15's.

"I would definitely probably think about it," said Pierce.

"I never know what KG is going to do, because he said he was going to retire four or five years ago," he said. "Every year he says he’s done, and every year he keeps coming back. It would be great."

"But we talk. We text at least once a week," he said. "I'll ask him this week. The season is coming to an end."


Pierce, 38, actually has two seasons remaining (at roughly $3.5 million each) on the deal he inked with Los Angeles.


One more year guys, just do it.