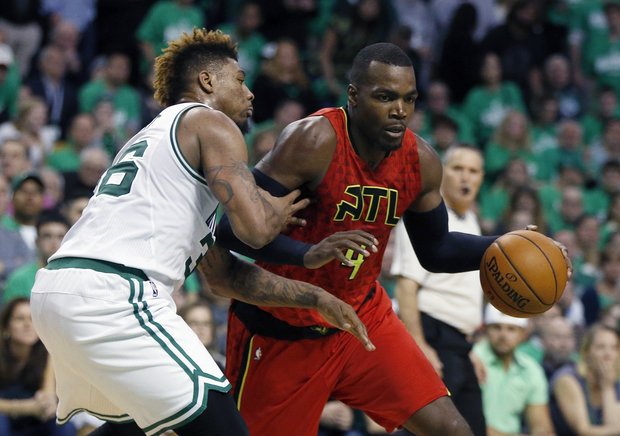 After two years of showing flashes of brilliance at times combined with a fair share of head-scratching moments, Marcus Smart has been nothing short of inconsistent in his time as a Boston Celtic. After being drafted 6th overall in 2014 over the likes of Julius Randle, Elfrid Payton, and Doug McDermott, Smart was expected to step in right away and contribute.

Defensively, Smart has lived up to the hype, providing lock-down effort in most games on the floor. On the offensive side of the ball, a seemingly-broken jump shot and turnover woes has hampered Boston fans' hopes for him to become anything resembling a reliable scorer.

As the 2015-16 season progressed, Smart's scoring ability showed promise, but not up to expectations as a 6th overall pick. In his sophomore year at Oklahoma State, he averaged 18 points, six rebounds, five assists, and three steals per game. In his second year as a Celtic, he finished the regular season with 9.3 points, three assists, and just over four rebounds a game. His stats were acceptable given his role on the team, but many fans craved more out of the Dallas, Texas product.

As the postseason came along, however, fans saw a glimpse of the Smart we all hoped for coming out of the draft.

In the playoffs, Smart is shooting nearly 40% from the field and 37.5% from the 3, averaging 12.3 PPG. He's also racking up 4.5 rebounds, 3.8 assists, 1.3 steals, and 1.3 blocks per game. Aside from an atrocious Game 2, where he scored just three points on 1-11 shooting, Smart has been stellar this postseason, and is looking to be a key contributor in the near future for the Celtics.

Smart's success in Game 1 and 3 was impressive, but Game 4 showed fans that doubted the pick two years ago why the Boston front office took him just outside of the top five.

In 42 minutes of action, Smart scored 20 points on 7-15 shooting, 3-8 from 3, eight rebounds, five assists, two steals, and finishing with a team-high +/- of +24. After a slow start where many fans screamed at their televisions at Stevens to get Smart out of the game, he quickly changed that narrative. Even considering his remarkable stat line, his true mastery came in his late game heroics on defense against Paul Millsap.

Millsap dominated in every facet of the game in the first three quarters and into the fourth. Before Smart switched over to him on defense, he had just scored his 41st point of the game on 17-25 shooting. To put it simply, he was unstoppable and single handedly defeating the C's by himself.

During a timeout, Brad Stevens was out of options, and asked the 22-year-old guard if he would try his hand at covering the three-time All-Star.

In his time on defense, Smart allowed just one Millsap bucket and forced multiple bad misses, allowing for the C's to get back in transition and cut the deficit. Against Smart, Millsap scored 2 points on 1-5 shooting, just 20% from the field. Against the rest of the Celtics roster, he scored 43 on 18-26 shooting for a ridiculous 69% from the field. The 6'4 guard locked down the 6'9 forward, and helped pave a path for the miraculous comeback.

According to the Chris Forsberg of ESPN, Millsap wasn't the only Hawk that fell victim to Smart's tenacity on defense.


Hawks' sharpshooter Kyle Korver was quick to address Smart's defense in the post-game interviews after Atlanta finished the game 6-27 and 22% from the field once the Boston guard began defending Millsap.


Kyle Korver on Celtics having Smart guard Millsap late: "They got us out of whack." https://t.co/IpymjAcQes
— Brian Robb (@CelticsHub) April 25, 2016

While dominating the Hawks' best scorers in the game on defense, he put on a scoring show of his own in the fourth quarter, scoring 11 straight in a stretch for the C's in a span of just five minutes. Down 70-64 at the time, a wild transition and-one bucket at the rim, followed by a baseline dunk and two 3's sparked a comeback for the ages, and quite possibly the biggest win by the C's since the 2012 Eastern Conference Finals.

Smart willed himself to the finish line, playing in the final 26:20 of the game, providing key stops and scoring outputs for the Celtics. According to Boston sports reporter Mike Dowling, it was the first time a player off the bench had 20 points, eight rebounds, and five assists in a playoff game since Manu Ginobli did it for the Spurs in 2007.

The C's are looking ahead to Game 5 in Atlanta, but Smart's late game heroics in Game 4 will be remembered in Boston for quite some time.