Latest rash of major injuries is something that Doc Rivers, Celtics fans can relate to 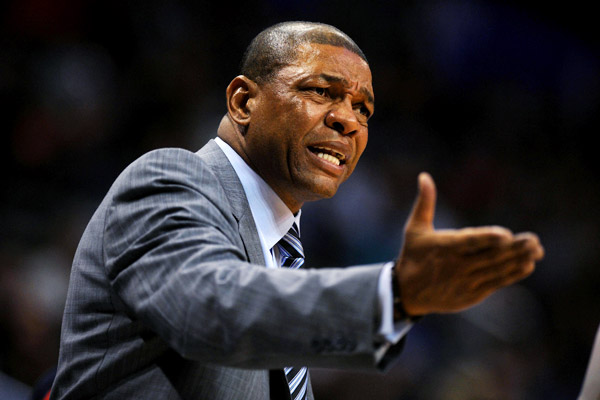 It was interesting to see Doc Rivers comment on Stephen Curry's injury on Monday. Not that Rivers is incapable of empathy for an opponent, but it was somewhat surprising considering the back and forth the Clippers and Warriors have had over the years ("Cool story, Glenn").

Doc Rivers on Steph Curry: "I don't want anyone to get injured ever... It happened to us in Boston. No Kevin (Garnett) one year and Perk (Kendrick Perkins) hurt for Game 7 (2010 NBA Finals). It's part of it. It's still a team game at the end of the day but you obviously don't want a guy like that to ever go down."


If anyone knows what it's like to lose important pieces of contenders with championship aspirations, it's Doc. Rivers' comments were made before Chris Paul suffered a broken bone in his hand and Blake Griffin hurt his quad during their Game 4 loss. Paul is out indefinitely while Griffin is sidelined for the rest of the postseason.

In comparing the recent injuries to the players hurt during Doc's tenure in Boston, there are probably more differences between the teams. The players' primes and heights vary while the timing of the injuries are wide ranging.

Despite hopes for a dramatic return, Kevin Garnett was lost for the end of the 2009 season after hurting his right knee in a February game at Utah. Garnett, in his 14th NBA season at age 32, returned briefly a month later, but was shelved for that season.

With the Celtics on the cusp of a title, Kendrick Perkins tore his MCL and PCL in his right knee during Game 6 of the 2010 NBA Finals. With Perkins being gone for the series, the Lakers out-rebounded Boston by 20 in Game 7 and the Celtics lost their chance of adding Banner 18 by four points. Perkins would not return until January 2011.

Meanwhile, Paul, firmly in his prime, will likely be an All-NBA selection. Griffin went thru a turbulent season, but there's little reason to think he won't return to perennial all-star form. Curry will likely repeat as league MVP and is arguably the best player in the league.

The injuries are devastating for the Clippers as this team as currently comprised might have had their last serious run cut short.

The 2016 Clippers have vibes of the 2010 Celtics. Each team drifted back a step in the regular season from elite status to a contender with a puncher's chance. The Perkins injury ruined the Celtics run. The Griffin and Paul setbacks probably has ruined any chances for this year. There's only so many chances a team will have to win a championship before breaking up the band. Those Celtics had a couple more years of quasi contention. Los Angeles may have just entered that territory.

As for the Warriors, the '09 Celtics come to mind. Each team chased history while proudly defending their championship. The Celtics got off to a 27-2 start, setting a NBA record  for best start before Christmas Day. The Warriors broke that mark en route to greatest regular season of all time.

The '09 Celtics lost in seven games to the Dwight Howard-led Magic. The Magic defeated Cleveland in the next round. Orlando featured a wacky small ball lineup where neither opponent could match up with Rashard Lewis and Hedo Turkoglu. With a healthy KG, it's safe to assume that lineup wouldn't have been as effective. Unfortunately for the NBA, instead of LeBron-Kobe I or a Celtics-Lakers rematch, the league got an underwhelming five-game NBA Finals.

Not only are NBA fans rooting for a full Curry recovery, but you can imagine the people in the league offices are as well. The Warriors have been the top story line all year long. And while the Spurs are more than worthy to represent the West or the Thunder may have the star power, this season ending without Golden State fighting for a championship would be unsatisfying.