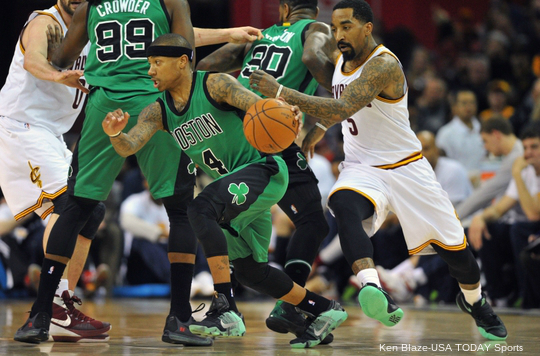 Isaiah Thomas has yet to turn the ball over in the month of March.  The last time the Celtics starting point guard committed a turnover was on February 29, with 1:09 to go in the fourth quarter of Boston's 100-95 victory over the Jazz.


Here's are Isaiah's averages over three games this month:

As impressive as those stats are, this is where things get really interesting:

Thomas' point totals in the last three contests are 30, 32 and 27.  Over the past 32 seasons (1983-84 is as far back as Basketball-Reference tracks of turnovers), only one other NBA player has scored at least 27 points in three straight games without committing a turnover--Michael Jeffrey Jordan from February 22-26, 1991.

As the above tweet suggests, if anybody was going to pull off this feat I'd expect it to be a big man who rarely has to pass or dribble.  The fact that Thomas has done it as a point guard/primary ball-handler is just absurd.