The Celtics could sign Kevin Durant and Al Horford this offseason 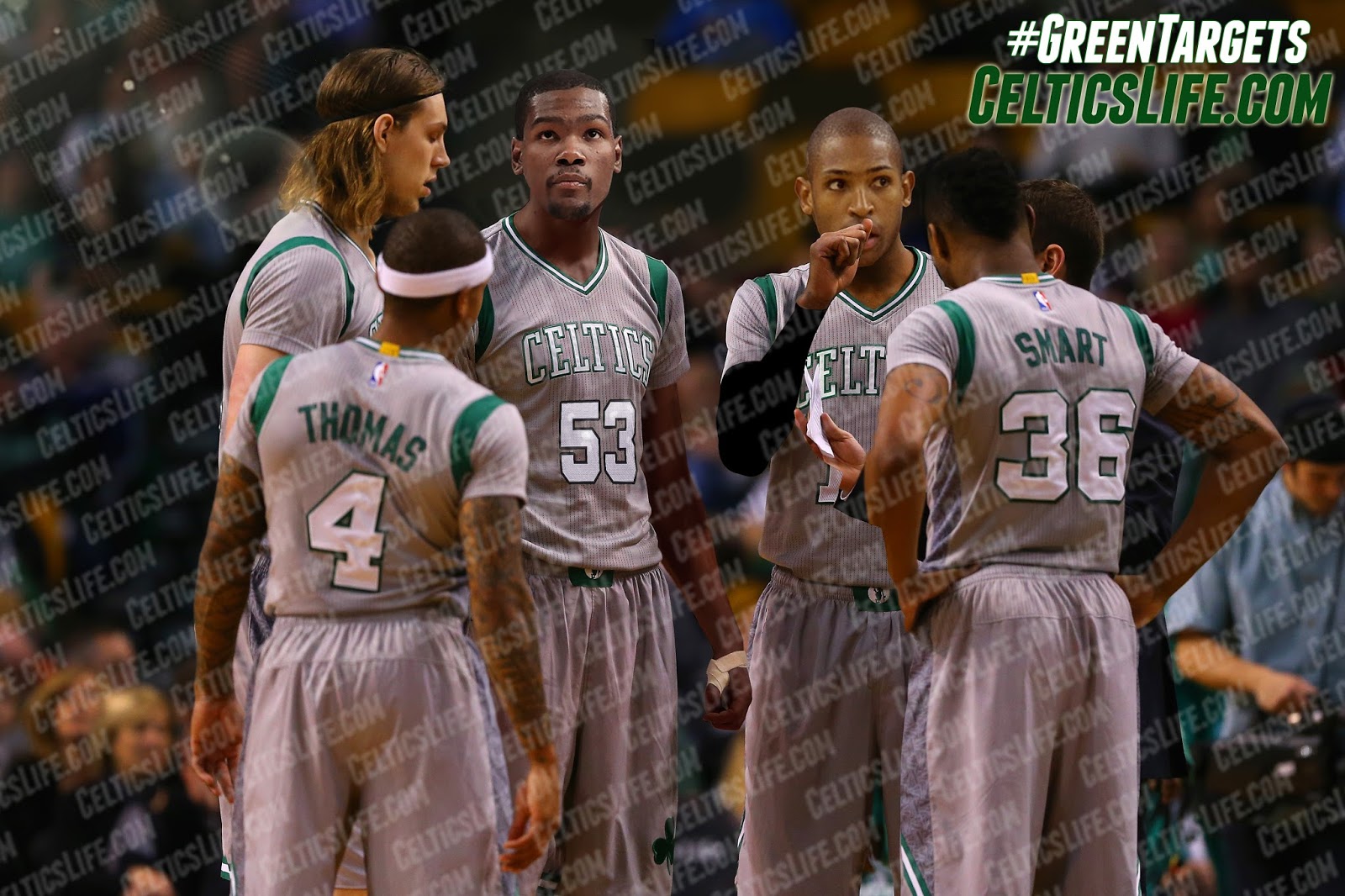 On the surface, this is a preposterous suggestion. And to a large degree it is - the chances of the two top potential free agents teaming up to sign anywhere - let alone Boston - is minimal. Let's get that out of the way to start.

At the same time - suggesting that this could potentially happen isn't quite as baseless as you may think it is. Over the past couple of days, two things have surfaced to lay some credence to this hypothesis.

Let's start with an excerpt from one of Zach Lowe's two trade deadline podcasts*:


I heard from two really powerful guys (in the league) - who don't normally BS around - they said that they have heard that Horford is on the shortlist of guys that Durant would really want to play with.

There's our start. There's a remote chance that Kevin Durant and Al Horford would like to combine forces.

Then we have yesterday's comments from Nate Jones. For the unfamiliar, Jones does digital media and marketing for Goodwin Sports - Durant's previous sports agency. He suggested that Boston would be Durant's best landing spot if he were to leave Oklahoma City. Again, far from anything even approaching concrete - but it's someone with real marketing experience and some familiarity with Durant's line of thinking who believes Boston has put themselves in a position where they're a good fit for him both on and (probably more importantly) off the court.

Again, it's unlikely. But at the same time, there's enough here to make one think that it's at least a conversation these players could have.

Could the Celtics make the numbers work?


Before I get too far into things, I'd like to note that Ryan Bernadoni just did an excellent deep dive into the Celtics financials. It's a really, really great read, and it made a lot of my work below a whole lot easier. 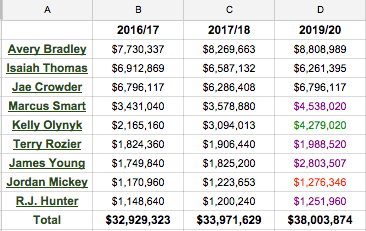 Kevin Durant and Al Horford will both be entering their ninth season next year. One year before their potential earnings would take a jump. That's important, because it's what makes this all possible***.

Maximum contracts are set based on a player’s years of service and expressed as a percentage of Basketball Related Income (BRI). You can figure out maximum contracts amounts using the formula:


For the mathematically challenged, that would put Durant and Horford at a combined 52 million dollars. Six million below the cap - Giving the Celtics just enough to sign all of their first round picks (if they'd like). 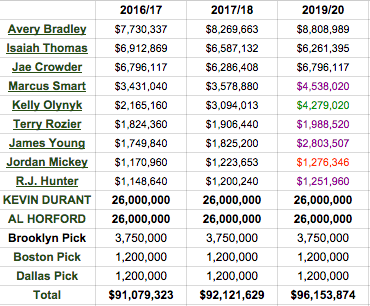 Of course, there's plenty about the roster construction to ponder - The Celtics could use that six million dollars elsewhere instead of using the picks, they could create more space by finding new homes for some of their lesser promising prospects , they could wait to sign their rookies, they could decide to guarantee Jonas Jerebko's affordable 5 million dollar contract, etc.

Another consideration - Jared Sullinger & Tyler Zeller are both scheduled to become restricted free agents this off season. Similar to the Kawhi Leonard deal this past summer - they could receive qualifying offers (3.6 for Zeller, 3.2 for Sullinger, those would act as holds on our cap****), verbally agree to terms but wait for Durant & Horford to sign. Allowing the Celtics to use their cap space on Durant & Horford, and then exceed it to retain either or both of their two restricted big men*****.

All of this is clearly very secondary. The bottom line is that the Celtics could sign Durant and Horford, to go along with the nine players they have under contract, and add/retain a few extra pieces to solidify the bench.


Let go of the cynic in yourself for just a moment. The part of you that wants to dismiss things that sound too good to be true. The Boston Celtics will have a compelling offer to make to Horford & Durant:

A starting lineup of Isaiah Thomas, Avery Bradley, Kevin Durant, Jae Crowder and Al Horford******. A bench made up of Marcus Smart, Kelly Olynyk, whoever is selected with the Brooklyn pick, and potentially Jared Sullinger and/or Tyler Zeller. With two more Brooklyn picks in the pipeline and arguably the best coach in the game at the helm.

They offer the chance to become long-term contenders in an improving but still lacking Eastern Conference. Today, the Celtics rank in the Top 10 in offense and defense - imagine swapping out Evan Turner & Amir Johnson for Kevin Durant & Al Horford?

I'll end where I started. This is a pipe dream. But for the first time in a long time, the Boston Celtics have put themselves in a place where they can make a compelling offer.

Does that make me crazy?

* Lowe was discussing the future of the Orlando Magic. Suggesting that he had heard this, and wondered if it was part of the motivation for them to free up space

** Amir Johnson & Jonas Jerebko have non-guaranteed contracts, Evan Turner is an unrestricted free agent, and Tyler Zeller & Jared Sullinger would be restricted free agents.  There's a lot of ways to get creative with the cap, but it would pretty much require that Johnson be waived and Turner's bird-rights be renounced

*** It's why a lot of people think Durant will sign a one year extension at the end of the season. The difference between signing a max deal with 9 years experience and 10 is significant. With the salary scheduled to jump again next season, that could equate to a difference of roughly 68 million dollars.

**** This scenario would call for some creative accounting - It would pretty much require the team to either trade some of this year's picks or some of the lesser valuable young players.

***** Could be easier said than done, though. The Spurs were able to do this because they could offer Kawhi Leonard the max. The Celtics clearly won't do this for either Sullinger or Zeller, so it'd require some real cooperation. Sitting on the sideline during free agency for any amount of time could threaten their chances in the market. Though that's not as much of an issue if Horford & Durant were to sign early into free agency.

****** That seems like almost a perfect supporting cast for Durant & Horford, doesn't it? Bradley & Crowder especially.