Twenty-Three, Nine: Yet Another Version of “The Odd Couple” 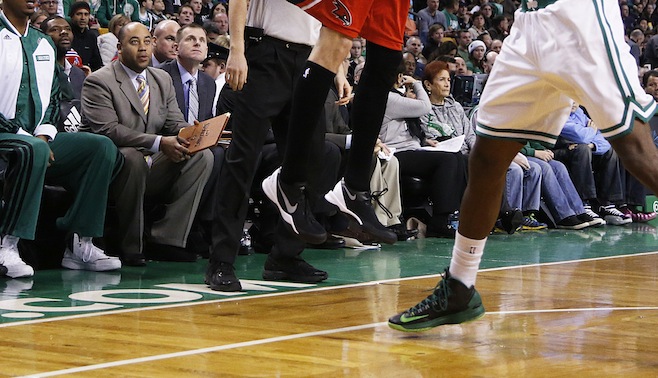 That’s what you get when you combine the Harlem Globetrotters and the Boston Celtics.

An unlikely combination for certain, huh … but perhaps fitting for so unusual a numerical alignment.

Of course, we as hoop fans recognize “twenty-three, nine” as the traditional distance for a three-point field goal attempt in pro ball. The line has fluctuated some at the lower levels of play and in women’s ball – for a while there, a shot from the top of the key was getting a high school player three points.

But aside from the NBA’s brief three-year flirtation with a flat 22’ arc back in the mid-90’s – the average team’s per-game attempts increased from 9.89 to 15.30 during the first year of that experiment – the arc of today’s NBA is the same one used during the nine seasons of Dr. J’s red-white-and-blue ABA.

It’s also the very same three-point line that was introduced to North American professional basketball by a genuinely renegade outfit known as the American Basketball League in the fall of 1961.

The ABL was formed, in part out of spite, by a guy named Abe Saperstein, more renowned as the founder and operator of the Globetrotters until his death in 1966. Appearances by Saperstein’s ‘Trotters had been providing a boost to NBA gates from the league’s inception.

As the turbulent ‘60’s arrived and pro sports were expanding westward, Old Abe believed that the league had reneged on a gentleman’s agreement that he was to become the owner of the league’s first franchise in Los Angeles by relocating the Minneapolis Lakers to SoCal for the 1960-61 season.

This betrayal, real or imagined, begat the modern game, you might say.


Ever the promoter, Saperstein wanted his league to feature a three-point field goal – the idea is said to have been tried out experimentally a time or three at the college level in the ‘40’s and ‘50’s. He even had a marketing campaign laid out – he was going to sell the shot as “The 25’ Home Run.”

While piecing together the nuts and bolts of his new project, Abe ran into an old pal named Bill, an ex-player who’d been part of a college all-star team that had toured with the Globies a decade or so earlier. Bill had been a pretty fair player, a particularly good shooter, in his day.

Brother Bill – a Hall of Famer twice over – was quite enthusiastic about Saperstein’s innovation, though he had some reservations about the distance. After some in-the-gym experimentation, the player, who’d only recently notched 19 points in a pivotal Game 4 final-round road victory en route to a fourth ring, had an idea.

Bill suggested to Mr. Saperstein that, instead of measuring the 25’ distance from the center of the goal, it be measured from the back rim of the goal.

Saperstein deferred to his friend’s expertise. When the ABL was officially launched soon thereafter, its court sported both a three-second lane that was (I kid you not!) 18’ in width and the very same three-point line behind which Steph Curry shoots so exceptionally nowadays.

Interestingly, in its lone full season of play, ABL players utilized the three-point shot more frequently and more effectively than did the more well-known ABA in any of its nine seasons. For the 1961-62 season (the same year Wilt averaged 50, BTW), 8.6 percent of ABL field goal attempts were launched from three-point-land at a success rate of .304. The average team attempted 7.75 treys a game.

The average ABA team never posted a usage rate above 6.5 percent (Year 3), never quite drained the long ball at a 30 percent clip, and never exceeded 6.32 attempts per game (also Year 3). It took the average NBA team eight years to surpass the ABL in accuracy, another four years to match the old league’s usage.

Now, as far as the inventive Mr. Bill goes, he had himself a rather eventful ABL season. The USC alum began the season coaching the Los Angeles entry in the league, the Jets. The good news for the forward-thinking coach is that his team shot an amazing .362 from long range, essentially three-for-eight per game. The bad news is that the Jets folded after just 39 games.

But fret not the fate of the fella whose team, one decade later, would set a record for consecutive victories that stands to this day … unless coaching legend Luke Walton should decide to lay claim to it.

Around the time the Jets were ceasing to exist, the intrusive owner of one of the seven remaining franchises had succeeded in getting on the last nerve of his coach, who abruptly resigned. Unexpectedly available, Bill Sharman was hired to coach the Cleveland Pipers (whose roster included future five-time NBA champion Larry Siegfried) to the league championship.

Which is how, finally, the Boston Celtics enter this little narrative.

For the record, and ironically, Coach Sharman’s second ABL squad averaged the fewest three-point shots (5.16 per game), though they slightly exceeded (.306) the league average in accuracy.

Mere footnotes in this short history are the deposed coach and meddlesome owner of the Pipers, John McLendon (professional basketball’s first African-American coach) and a 31-year-old George Steinbrenner, respectively.

So the next time you find yourself on a barstool, short of coin but still long of thirst, try regaling another patron with the some hoops history; this “tall tale” ought to be good for a sip or two.