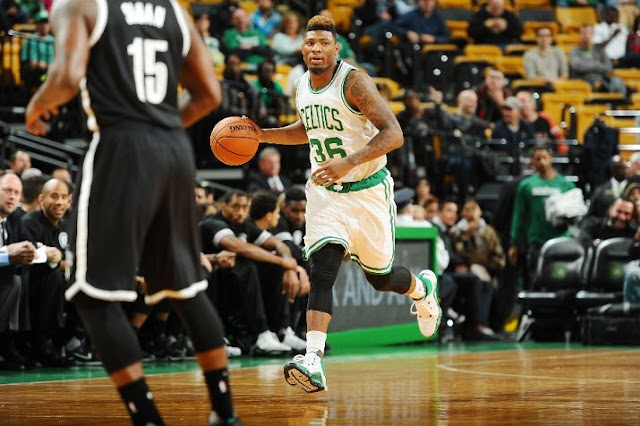 While many players from both the Nets (Jarrett Jack, Joe Johnson, Thaddeus Young, and Brooke Lopez) and Celtics (Jae Crowder, David Lee, and Isaiah Thomas) sat out tonight's game, it was still great to see the Celtics play back at the Garden. Tonight was their preseason debut at home, and even though the game doesn't count, was missing a lot of the top talent, and featured Brooklyn's Dahntay Jones playing basketball, it was still a sight for sore eyes to see them on the parquet.

The Celtics were led by two of their new additions, Amir Johnson and Terry Rozier. Johnson finished with 15 points on 6-8 shooting, including 1-1 from three. Rozier was all over the court, putting up 16 points, 6 assists, 4 steals, and 4 rebounds. Evan Turner also did a little bit of everything, finishing with 10 points, 7 rebounds, and 6 assists.

The Celtics got off to a slow start, but behind some nice passing all around that included two outstanding pocket passes from Marcus Smart to Tyler Zeller in the pick and roll, and two passes to backdoor cutters from Amir Johnson, they led 31-26 after the first quarter. Assists were recorded by almost the entire Celtic frontcourt, with Johnson, Kelly Olynyk, Jared Sullinger, and Tyler Zeller all tallying one early. A good sign from a team that plans to move the ball.

Behind strong play from Brooklyn's Ryan Boatright and Thomas Robinson, and a lack of defensive intensity on behalf of the Celtics, the Nets turned the tables and led for the majority of the 2nd quarter. Boston finished the quarter strong, highlighted by a put-back slam from Smart off a missed Olynyk three that brought the Celtics bench to its feet, and went into the half up 59-58.

Smart and Terry Rozier were the Celtics to watch in the first half, and neither disappointed. They each brought instant energy to their minutes, and I already have visions of Smart tiring out opponents who will probably assume they have a break coming when he goes out, just to look up and see Rozier, who was all over the court hitting jumpers, making steals, and attacking the rim in the first half. If it wasn't for that pesky Isaiah Thomas guy in front of him in the depth chart, he would be getting some serious time.

Amir came out to start the second half absolutely carrying the Celtics, scoring the team's first 10 points in the quarter, all in the first 4 minutes. That spurt gave the rest of the team time to loosen up, which they did following Johnson's flurry. Smart and Rozier hit threes, and the scoring opened up from there. The defense still did not impress overall, especially when considering the elite group of talent they were up against in the Brooklyn Nets JV squad, but the Celtics added to their lead and ended the 3rd leading 87-80.

The 4th quarter was garbage time of all garbage time. Benches were emptied, shots were bricked, turns were overed, and I decided Boatright looks and dribbles like the NBA Impersonator Brandon Armstrong. James Young did hit 2 threes, including one he was also fouled on. Oh great, just enough for me to still hang on to this pipe dream. Jonas Jerebko had a great backhanded bounce pass to a back cutting Jordan Mickey,who despite not playing until the 4th, slammed it home with authority. Overall the 4th was pretty much a draw, and the Celtics closed it out 111-105.

Terry Rozier looks like lightning, and had three dazzling takes to the hoop that resulted in two fouls and one missed layup. Highlights are coming.

Amir Johnson is so under control, and has such great hands, he is a pleasure to watch in the post.

On a night that he struggled shooting the ball, Avery Bradley hit 2 threes from the wings, continuing to improve his work there.

Kelly Olynyk's fall-away jumper is something I could really get used to.

Perry Jones checked in late in the 3rd, and checked out early in the 4th. He played six minutes and made a three. You would figure if he was going to get an honest look it would have been tonight.