Who is your all time Celtics starting 5?

Kelly Dwyer of Yahoo Sports' "Ball Don't Lie" blog posted his thoughts on the all time starting 5 for your Boston Celtics. No easy task for a team that has won 17 championships and has had a boatload of Basketball Hall of Famers suit up in green at some point.

The parameters for Dwyer's selections are stated before he gives his lineup, so for the sake of fair debate, this is what to keep in mind when either suggesting he burns for omitting your favorite player, or calling him a genius because you agree with him.

Also, it wasn't mentioned, but it goes without saying that only the players contributions while playing for the Celtics matter in these debates. For example, if you pick Shaquille O'Neal, Bob McAdoo, Dominique Wilkins, Gary Payton, and Pete Maravich, I don't think you get it.

Because we don’t like making tough decisions, the lineups will reflect the All-NBA line of thinking. There will be no differentiation between separate forward and guard positions, and the squads will be chosen after careful consideration of individual merits only – we don’t really care if your team’s top shooting guard and point guard don’t get along.

So all that does really is eliminate you from trying to creatively play Paul Pierce at shooting guard, or our old school true centers like Robert Parish and Bill Russell at power forward. There are 5 spots, but only 3 positions. Have fun telling Kevin Garnett whether he was a forward or a center.

I actually like Dwyer's choices a lot. When you look into it the Celtic history is absolutely LOADED at forward, and while a lot of great guards have been here, in comparison the choices are a lot thinner. This also speaks to the greatness of the Celtic organization, because you could honestly pick a backup 5 that would be better than most teams. 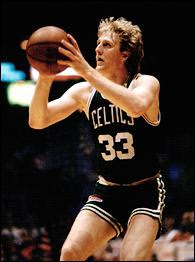 Now for my take. Unlike Dwyer, I will not be trying to minimize arguments. Throw his rules out the window. I expect arguments. I expect, nay DEMAND, that people call me an idiot. Pick any Celtic at any time and play them at whatever position you see fit. The only rule I have is only their Celtic production counts.

Forget the All-NBA rules with 2 guards and 2 forwards. Pick a functional starting 5 that would have to play a game. A lineup with a center, power forward, small forward, shooting guard, and a point guard.

The only real change I would make to his lineup is at forward. Presumably Larry and Havlicek would be small forwards, meaning you have to go with one or the other. I'm going Bird, mostly because Havlicek didn't have a slew of highlights set to John Mellencamp's "Small Town" on NBA Superstars Volume 1 in my formative years.

That opens up a hole at power forward. I'd fill it with either Kevin McHale, Kevin Garnett (short tenure, but dominant at times), or bump Cowens down from center to power forward. Imagine seeing '08 Garnett in the frontcourt next to Bill Russell? For me at least, his time with the Celtics just didn't last long enough, and I can't see putting him in their all time starting five. So McHale or Cowens.

I'm going with the owner, operator, and master key holder of the torture chamber. The man with footwork that would make Bruno Mars jealous. Kevin Mchale. Apologies to Cowens, as it is always tough not to throw your support behind a man who attacked another man for flopping.

That's my five. Let's see yours in the comments.