Danny Ainge says Brad Stevens will be one of the greatest NBA coaches ever--does he mean it? 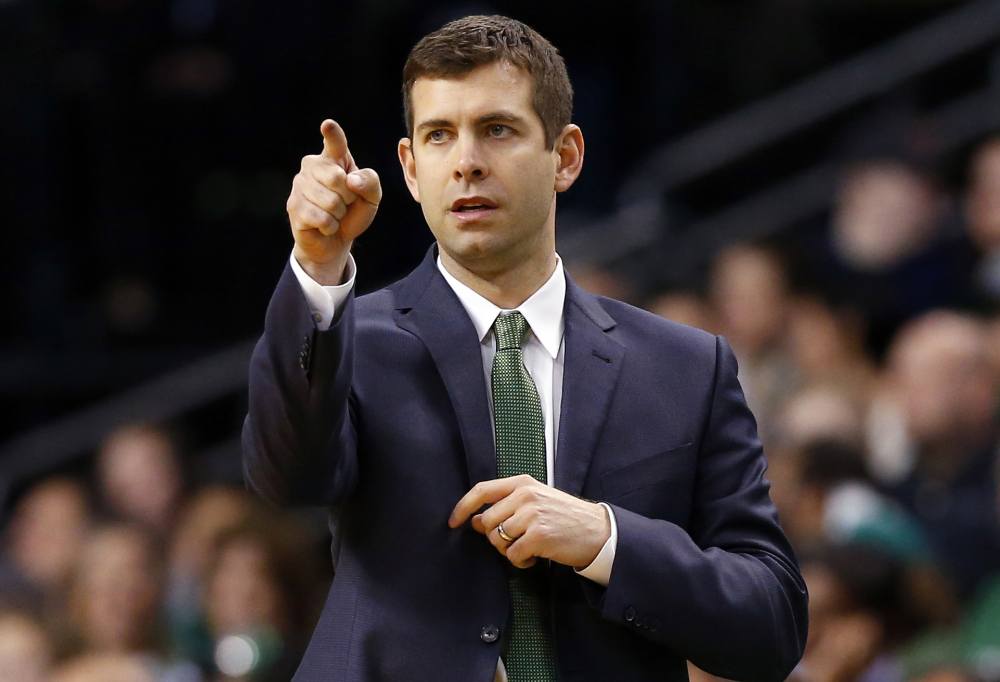 Brad Stevens, a coaching legend? Seems like his general manager already envisions him as one.

Expectations are going to be pressed hard on Stevens this year, with constant praise coming his way across the league (even from the likes of Lebron James) for what he accomplished in Boston last season.

This latest round of extensive exaltation is coming straight from upstairs, though, as Danny Ainge took to the C’s television home CSNNE for an interview in which he pumped Stevens’ tires to new levels.

Ainge, who hired Stevens out of Butler University as a surprise candidate when Doc Rivers skipped town in 2013 for Los Angeles, also made sure to give himself credit for the signing in the process:

"I wouldn’t have brought him in and given him a six-year contract if I didn’t think he was really good and special," Ainge said to CSNNE. "I’m the first one to see how special he was.”


Going on to express his pleasure that Stevens is getting the credit he has over the past year or so, Ainge dropped the bomb: “It’s my opinion that in 10 or 20 years, we’ll be talking about Brad as one of the great coaches to ever coach in the NBA."

As invigorating as last year was, with Stevens’ calm and intelligent presence leading the way through a constantly overturning roster, it’s hard to take that statement seriously at the moment. What’s more interesting than the statement itself is the motive behind it.

Since as early as 2014, the rumors have circulated that high profile college jobs could be available to Stevens should he choose to pursue them. While he has shot down any idea of leaving Boston, the fact that Stevens could even be pondering the idea at some point down the line seems to give Ainge some chills.

The reason Rivers ultimately left Boston was likely disagreement with decisions by the team’s upper management, including the retainment of Rajon Rondo for the 2013-14 season and Ainge's determination to go into that year rebuilding.

Trade whisperings were circulating around Boston weeks before the draft. Ultimately Rivers departed to the Clippers, the Celtics were compensated a '15 first rounder, while Kevin Garnett and Paul Pierce were sent to Brooklyn on draft night.

Ainge was fortunate to land a coach in the aftermath as good, if not better, judging on last season’s massive 40-42 over-achievement. Through dozens of players and transactions; Stevens adjusted, pushed harder, and most importantly won.


Stevens is a known competitor who simply does not want to lose, and that became an issue during his debut season of 2013-14 where the team dipped to a dismal 25-57. In 6 years prior with Butler, he had only seen 49 losses total.

Tanking was something Stevens, a natural developer of talent from the college game, didn't seem thrilled with. While it was forced upon him in his first year, his fiery opposition became more evident in the second season.

When Ainge dumped Rajon Rondo, Stevens found a way for Jae Crowder to win games. Ripping Jeff Green out led to the utilization of Tayshaun Price, before relative unknown returns for him in Jonas Jerebko and Luigi Datome became major contributors on the way to the playoffs.

2014-15 seemed like another round of losing for the Celtics before Stevens reversed it all on Ainge. When the latter pushed across a trade for Isaiah Thomas at the trade deadline it became clear his attitude had shifted, even expressing his support for the playoff push directly.

Did Ainge change his rebuilding plans to appease Stevens? It’s tough to tell for sure, but Stevens did indeed become the biggest factor in the team not throwing away 2014-15 for a lottery pick.


While the question begs whether risking the team’s long-term rebuild for Stevens is a difficult one, he has certainly been publicly identified as a special coach by Ainge, especially with these latest round of comments. Hopefully this is indeed a view of his potential rather than hubris over the great hiring, because it could be either.

It would take a special kind of coach to successfully perform the unconventional rebuild of not landing a major free agent or drafting a star, but rather compiling and building upon internal talent. Better yet, a coach being a bigger force than the players on a great team would be an astonishing thing in the star-driven NBA.

The potential for a trade down the line is something Ainge also has emphasized, so he could be looking upon Stevens to build up assets in his system to push across in a major deal.

Whatever the motive was, Ainge is making it clear with his strong comments that Stevens is the man in Boston. The long, uncertain road towards future championship contention is in the hands of those two, and it sure sounds like Ainge wants Stevens to be at the head of it when the glory comes.