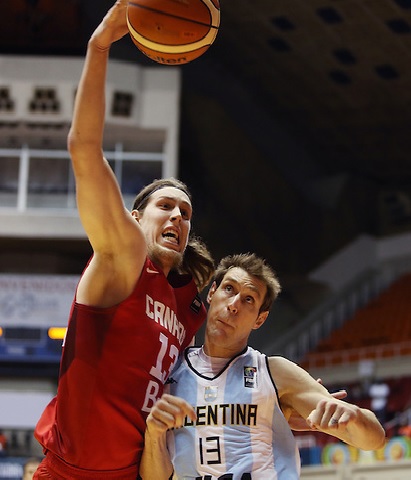 Canada's national basketball team is attempting to make its first Olympic appearance since 2000, and for a country that last won an Olympic medal in 1936, our neighbors to the north look like they may have a legitimate shot at a trip to Rio de Janeiro. The next stop is Mexico City, which will host the FIBA Americas Championship starting on August 31.

Canada Basketball, headed by general manager Steve Nash and head coach Jay Triano, has named a preliminary 13-man roster for a warmup tournament in Puerto Rico, and must trim that to 12 for the final competition. The team is led by reigning NBA Rookie of the Year Andrew Wiggins of the Timberwolves, while Celtics big man Kelly Olynyk should start in the frontcourt.

Olynyk had a scare in the first exhibition game, as he went down clutching his left knee after a collision while setting a pick. He went to the locker room and did not return to the game, but he later re-emerged and sat on the bench in no apparent pain. Canada Basketball has not given an official update, but reports indicate that Olynyk did not suffer an injury of any concern.


Seven other NBA players are on the squad: Raptors point guard Cory Joseph, 76ers shooting guard Nik Stauskas, Magic forwards Melvin Ejim and Andrew Nicholson, Mavericks (and former Celtics) power forward Dwight Powell, Timberwolves PF Anthony Bennett and Lakers center Robert Sacre. Also on the team is former Boston College star Olivier Hanlan. An All-ACC first teamer last season, Hanlan was chosen by the Jazz in the second round of June's draft and will play in Lithuania for BC Žalgiris, one of the Euroleague's top teams.

The two FIBA Americas finalists will qualify for the 2016 Summer Olympics. Canada is only the seventh-ranked team in the Americas according to FIBA's rankings, which were last updated following the 2014 World Cup, but they could surprise many in Mexico. Team USA is not taking part in the competition because it already qualified for Rio by winning the World Cup. Of the other five teams that represented the Americas in Spain, Puerto Rico crashed out in the group stage, Argentina, the Dominican Republic and Mexico all lost in the round of 16, and only Brazil reached the quarterfinals, where they suffered an 84-56 beatdown at the hands of Serbia.

Canada tipped off the warmup tournament by beating Argentina 85-80. Olynyk recorded eight points and three rebounds in 15 minutes prior to hurting his knee. Teams that do not reach the final but finish in the top five will have another chance to qualify for the Olympics in a tournament next July.