Celtics rookies are popular amongst peers 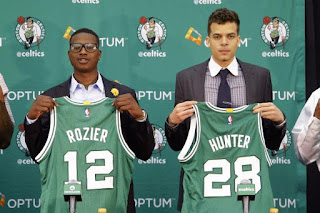 Even though experts and fans may have not been too fond of the Celtics 2015 draft selections, the rest of their classmates put them in pretty high regard.

In the annual NBA Rookie Survey, both of the C's first round picks were mentioned in the same breath as some lottery players.

R.J. Hunter was tied for second as the biggest steal at where he was selected in the draft.

Terry Rozier tied for sixth on this list with Phoenix's big man Miles Tuner. Rozier also got votes for best playmaker and most athletic. Dallas' Justin Anderson led the "most athletic" vote with 27.8 percent.

Hunter finished tied for second again in the voting for best shot in a runaway contest by Phoenix's Devin Booker.

It's no surprise that Hunter finished near the top in his respected categories. The form and release of his shot is arguably the best on the team even as a rookie and being selected 28th overall was a steal for the green. Hunter was a perfect fit filling a position of need (3 point shooting) and was at the right draft spot.

I think the opposite can be said for Rozier.

Many people were confused by the selection and after they asked "Who is Terry Rozier?" and found out he was also a point guard, it infuriated fans. Yes, he is a solid athletic player and apparently somewhat of a steal in the eyes of the Class of 2015, but he filled no real need for the Celtics and only added to the logjam at the guard position.

What was probably the most shocking in all this was that Jordan Mickey was no where to be found on any list. Clearly the rest of the rookies were not watching other Summer League matchups because out of all the C's youngsters, it seems like Mickey has the most buzz surrounding himself here in Boston.

In the end, does this really mean anything? Not really. My feeling is you can be the best player in the world, but if you are in the wrong system, then you will never progress. Danny Ainge and Brad Stevens can get the most out of the talent they bring in here, the ceiling however can only be so high at number 16 and 28 overall.

Hopefully next year we'll see the next Brooklyn N... I mean Boston Celtics great at the top of one of these lists.