Woj: Kelly Olynyk incident may have cost Boston its shot at Kevin Love 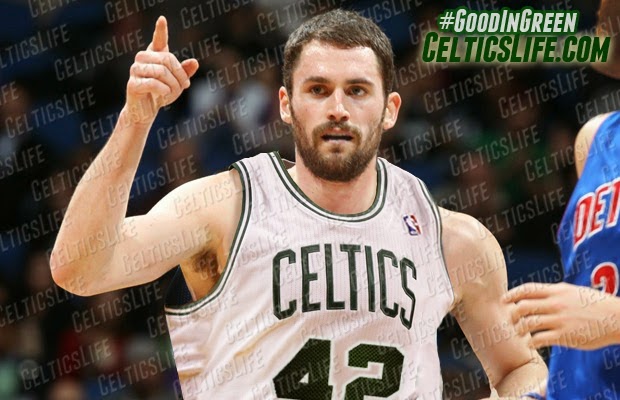 It's no secret that the Celtics would, pardon the pun, love to have Kevin Love in green. But after Game 4 against the Cleveland Cavaliers, where Love left early with a separated shoulder after getting tangled up with Kelly Olynyk, that ship may have sailed.

At least that's the opinion of Adrian Wojnarowski over at Yahoo! Sports.

Boston has been no sure thing to lure Love, but it had a better shot than most had believed. If Love left the Cavaliers, the Celtics had closed the gap on the Los Angeles Lakers, league sources told Yahoo Sports.

The Celtics were waiting for July, and the chance to let coach Brad Stevens lay out Love's expanded role in his system. General manager Danny Ainge wanted a chance to sell Love on a vision for surrounding him with complementary talent, on maximizing his popularity as New England's next star.

And so, suddenly, maybe everything changed on Sunday. Kelly Olynyk and Love tangled, Love's left shoulder apparently separated and clearly he's beyond furious. He called the play "bush league," and insisted that Olynyk "did it on purpose."

Whether or not Olynyk did it on purpose has already been discussed. He didn't. But if this one freak incident is enough for Love to cross Boston off of his wish list then so be it.

Love has every right to be frustrated and angry, as his first real chance at being a major contributor on a contender is snatched away. He should break things, curse the sky and be no fun to be around for the next few days or weeks. That doesn't mean he should take his frustrations out on Olynyk and the Celtics. Stevens certainly didn't tell Olynyk to go take out Love. The guy's simply uncoordinated.

Maybe this was just a lapse in judgement on Love's part. Is he really going to throw away the chance to team up with an amazing young coach in Stevens, a mastermind behind the wheel in Ainge and an assortment of young talent and picks to deal for more talent from one play? If the answer is yes then the Celtics are better off without him.

Talent aside, of which Love has boatloads, this whole fracas doesn't paint Love in the best light between the ears. He already forced his way out of Minnesota and he didn't exactly have a kumbaya-type season in Cleveland this year. Remember this article? That didn't seem to last long. At what point do we stop saying it's the teams that Love is on that are the problem and not Love himself?

Signing Love could have a major risk attached to it where if he stubs his toe at the Garden he could try to force his way out again. Just ask the Cavs. They gave up Andrew Wiggins and other valuable pieces for Love and it's quite likely Love will walk this summer after just one season.

It's also very telling that Love chose to pout in the corner this season instead of asserting himself. He wasn't happy with his role? Demand the ball more and do other things on the court to help the team win (i.e. improve on the defensive side of the ball). Chris Bosh certainly didn't enjoy becoming a third wheel, but I'd guess the two championship rings he has on his fingers cushion the blow just a tad. Love and LeBron James haven't become the best of pals? Well communication is a two-way street and when you are playing with the best player on the planet, you do your best to make it work.

Maybe if Love could have wiped the tears away from his eyes for a few seconds after Sunday's game, he would have noticed what playing for Boston really means: