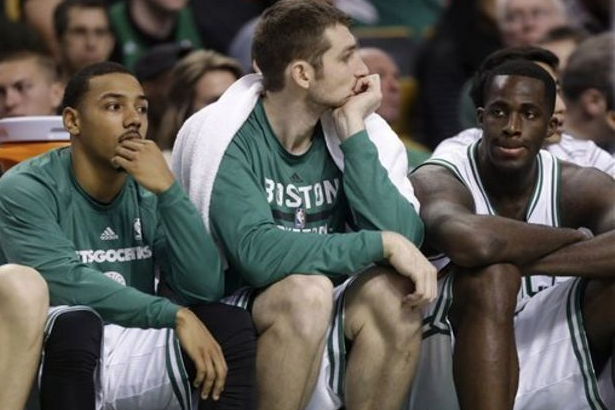 Losing in four games to the Cleveland Cavaliers doesn't really give reason for any positive playoff report cards for the C's roster. But for a team that wasn't expected to do much this season, making the postseason was icing on the cake, so grades can be given out on a bit of a curve:

Bradley's stats weren't terrible in the four playoff games, but he left fans wanting more. Coming off a year where he made 42.8% of his attempts from the floor and 35.2% from beyond the arc, his shooting numbers against Cleveland hurt in a major way. In Games 1 and 2, Bradley shot a dismal 6-for-19 from the field and had a combined +/- of -18.

The C's guard is going to take some heat this summer for his playoff performance. But don't forget how well he improved throughout the year, becoming a reliable shooter, while still defending at an above average level.

If anyone's stock dropped the most in one series, it would be Bass'. He struggled with the Cavs' bigs, to a point where you wondered why he was in the starting lineup.

His offense was nothing to write home about either. In Game 4, while the Celts were creeping back into the game, Bass, who shot 79% from the charity stripe during the year, missed all four of his attempts from the foul-line.

Bass' future in Boston is up in the air as the 10-year veteran enters unrestricted free agency.

Turner played well in the last three games of the series, but it's tough to ignore his stinker in Game 1. In the playoff opener, the C's primary ball-handler had a difficult time creating anything while staring down LeBron James, finishing the game with just two points in 17 minutes.

In Game 3 Turner scored 19 points, while grabbing eight boards and dishing eight assists. Those kind of numbers were more to the liking of Celtics' fans.

You can't really give Wallace a grade, since he only played four total minutes in the series, all in Game 4. He continued to be a valuable veteran on the bench, acting more as an assistant coach.

Whatever the future holds for Wallace, I wouldn't be surprised to see him pop up on Brad Stevens' bench as a coach someday soon.

Grade: A+++ (Just for being on the CelticsLife banner)

The Italian Stallion didn't see much time in the series, but still managed to take the biggest shot of Game 4, missing a three-pointer, with under a minute remaining, that would have cut the Cavs' lead to three. His defense still leaves a lot to be desired and if he is to stick around in the league he will have to play more physical.

His future with the Celts, and the NBA, is uncertain. But he seemed to enjoy his time in Boston and would be a reliable bench option on the cheap.

Thomas took well deserved heat for the last two games of the series. The pint-sized scoring machine will have Iman Shumpert in his dreams all offseason. In Game 4, Thomas missed 13 of his 17 attempts from the floor, including six of his seven three-point attempts.

You can't ignore his two 22-point outings in Games 1 and 2. Fans shouldn't judge his impact on this team because of two bad playoff games in front of the home crowd.

If anyone made a case for a new contract from one playoff series, it was Crowder. The steal of the Rajon Rondo trade was the best player on the court for the Celts as they battled the superior talent of the Cavs. The 24-year-old showed why he is a perfect match for the future of the Celtics.

Crowder demonstrated some serious heart standing up to Kendrick Perkins after the Cavs' big man's cheap shot in Game 4. When J.R. Smith threw a haymaker Crowder's way a quarter later, the energetic Celtic continued to chirp at the Cavs' bench while being carried off the court for the final time in his season.

Crowder is the perfect get-under-your-skin-guy. Unless some team throws a lot of money at him, I expect Danny Ainge to do what is needed to bring back the poor-man's James Posey.

Sullinger's game can leave you wanting more. When he is using his body down low, he creates space and becomes a threat to score on a consistent basis. The 23-year-old made seven buckets in the paint during his impressive 21-point, 11-rebound, Game 4 performance.

If Stevens has a set of goals for the offseason, Sullinger's weight, and shot-selection should be at the top of his list.

Sully's future is up for debate, but it's going to be tough to give up on a young guy who ended the series on such a high note. Now if he could just stay away from the three-point line, as well as the buffet line, things would look more positive for the former Ohio State Buckeye.

Whether it was due to his calf injury, or just bad play in general, Jerebko had a tough offensive series for the C's. His goose egg in Game 4 hurt, especially in 20 minutes of play.

Everyone is going to remember Olynyk's first playoff experience for his controversial tie up with Kevin Love's shoulder. But lost in all the hoopla is the fact that Olynyk struggled all series, besides the first quarter of Game 1. When Stevens wanted to make adjustments with his rotation in Game 3, KO was the odd man out, only playing three minutes total.

Olynyk seemingly took a step back this season, and it was on full display in the playoffs. My guess is that every trade talk between Ainge and rival GM's this summer will start with Ainge dangling Olynyk to whoever will take him.

Smart, like Sullinger, is another guy who was so close to kicking it into another gear against the Cavs. He left a lasting memory for fans going into the summer with his inspired play in the second half of Game 4 as the C's attempted to mount a comeback.

Again, like Sullinger, it would be wise for Smart to lay off the three-point attempts.

Smart will play in the summer league and should concentrate on taking the ball to the rack. He has a bright future in Boston and showed glimpses of what to expect next season.

Not much from Pressey who only logged a total of five minutes in the series.

Zeller continued to be steady on offense in the series, but got absolutely worked in the paint on the defense end. The Cavs' Timofey Mozgov dominated the C's center from the get-go.


Brad Stevens: It's tough to judge the series for Stevens, since his team was constantly facing a deficit for what seemed the entire four games. But still the second-year coach showed some gumption when he started Crowder and Jerebko in the second-half of Game 3. One could question why Smart or Thomas weren't on the floor for crucial fourth-quarter minutes in Game 3, but the coach probably had valid reasons for that apparent blunder.

His first NBA playoff-experience wasn't very memorable, but Stevens had the right approach as always. Not too high, not too low on his team. No matter what you take from the four games, the fact remains is that the Celts were over-matched from the jump, but not because of a lack of preparation from their coach.

Rob Welch4/30/2015 01:17:00 AM
Share
Rob Welch
I have been a die hard Celtics fan since birth, even though I don't really want to talk about the ML Carr/Rick Pitino Eras but I will if necessary.
Newer
Older