Ray Allen will NOT return to the NBA this season 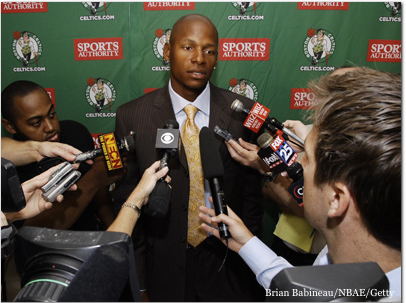 After much speculation, Ray Allen has decided not to return to the league for the remainder of the 2014-15 NBA season.

Ray Allen has announced he will not play this season and will re-examine options next year.
— Brian Windhorst (@WindhorstESPN) March 4, 2015


The pursuit of Ray Allen was an often newsworthy item over the course of the last 6+ months only for the resulting news to be "no news."

BREAKING: Ray Allen isn't doing anything differently than he was before you read this.
— Adam Kaufman (@AdamMKaufman) March 4, 2015


With that long list of suitors, Allen definitely had the opportunity to sign with a contender. Ultimately, the decision of who to play for became a non-decision with the announcement via his agent Jim Tanner that he'll continue to evaluate his free agency options in the off-season.

Ray Allen announces through his agent that he won't be playing in NBA this season but considering playing in 15-16. Allen turns 40 in July.
— gary washburn (@GwashburnGlobe) March 4, 2015