Who will ex-Celtic Ray Allen shoot for next? 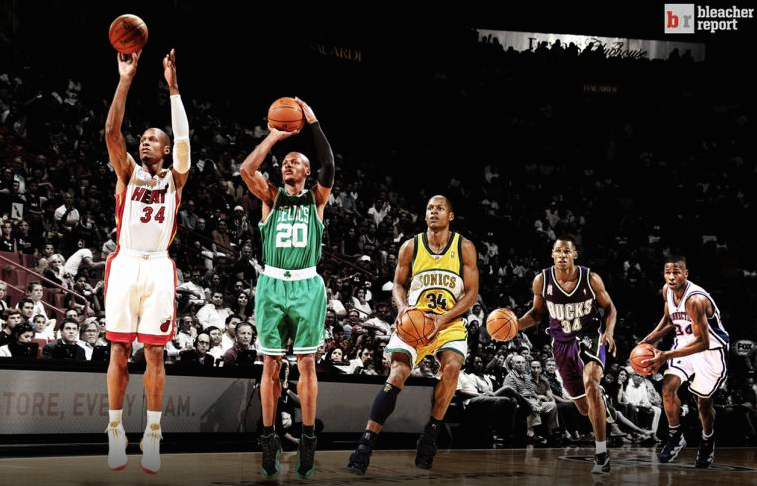 If you’re like me and you're tired – overtired – of winter storm watch 2015, there’s another way you can occupy your time: The Return of Ray Allen. This might not be the highest trending topic for some Boston Celtics fans, still jaded by his departure BUT the subject matter doesn’t include “shutdown,” “ban,” or “snowfall” so…let's go!

Now that All Star Weekend has come to a close, there promises to be substantial discussion over the next few days as we approach the trade deadline on the 19th. Last week, news swirled that both Goran Dragic in Phoenix and Utah’s Enes Kanter are potential subjects of deadline driven moves. Last night, Amar'e Stoudemire and the Knicks agreed to a buyout. This morning it was reported the Celtics are chatting with the Denver Nuggets about a trade involving Ty Lawson. I'm hopeful this week won't be boring.

Earlier this month, we heard that the Atlanta Hawks are pursuing Ray Allen for a roster spot. After the trade of Adreian Payne AND the Hawks loss to the Celtics last week [humble brag], it has been speculated that their pursuit of Allen will heat up.


In my opinion, any contender with a roster spot and chemistry conducive to adding a player of Ray’s make-up should throw their hat into Ray’s ring. If I’m Allen, do I want to play for Doc Rivers again and join LAC? Reunite with my archrival turned teammate LeBron in Cleveland? Or compete with a contending squad like the Hawks or Warriors? If chemistry is a big consideration for Allen, reminiscing with ex-teammates and/or coaches (multi-season Celtics Assistant Coach, Tyronn Lue joined the Cavs this season) in Cleveland, Memphis or Miami could play a role in his "decision." Golden State – who maybe aren’t in dire need of Ray’s talents – are taking a respectful yet casual approach as a suitor.

"We're not banging down his door and asking him to go to dinner and stuff like that. He's been around a long time, and I think he can view the opportunities that are put in front of him and if he has more questions we'll answer them, but it's not anything imminent. And we'll wait to see if we hear anything."


At least publicly (LeBron James has personally met with Ray), the Cleveland Cavaliers also appear to be taking a patient approach to wooing Ray.

"It would be great to have a piece like that. But that's up to him. With him, we'd be great. Without him, we're going to be great as well. It would be a great addition. We'll see what he does."

There’s no question, Ray has stayed in competitive shape and ready for NBA minutes. Don’t believe me? Take a quick glance at his Instagram account, where he will immediately make you feel like a sloth. Something tells me, Ray would shovel out his whole neighborhood…for fun. 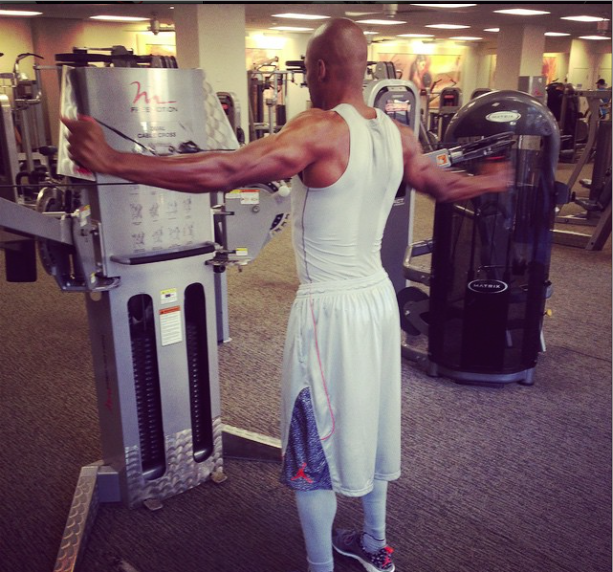 The “wait it out” or in Ray’s case “sweat it out” technique is a great play on his part, while we await his fate. With a number of teams eyeing Ray, to say he’s not necessarily returning this season is a little like Bill Belichick saying Tom Brady is questionable for a following day Patriots' match-up. That keep-them-guessing mentality is a proven formula. I see you Ray. I’m not fooled (until I am).

Regardless of where he ends up – if and when he returns to the league this season – Ray will always be hailed as a consummate shooter who takes great pride in what he does and how he does it.

For all you gambling guys and gals – place your bets, Jeff Shultz at ajc.com shared Vegas Insider’s odds for 9 teams’ likelihood in signing Ray.

Via Tony Mejia at VegasInsider.com, the Atlanta Hawks currently sit with the best odds of signing Ray and 3rd best for winning this season’s NBA title:

Atlanta Hawks
Pros: The Hawks share the ball beautifully and seek out the open man, so getting the great looks Allen has become accustomed to wouldn’t be a problem. Although he likely wouldn’t share the floor with Kyle Korver too often, there would be late-game situations where he’d share the floor with the guy who has replaced him as the league’s deadliest shooter. That can’t hurt. He’d instantly provide a championship pedigree to a contender that doesn’t have anyone on the roster that has reached the Finals.
Cons: Once Thabo Sefolosha returns from his calf injury, Allen would be even more of a situational player, since head coach Mike Budenholzer would have another key option on the wing beyond starters Korver and DeMarre Carroll. Of course, at this stage of his career, that wouldn’t be such a bad thing. Sportsbook.ag NBA title odds: +700 (7-to-1), currently third-best.
Odds Allen signs: Trading first-round selection Adreian Payne to Minnesota for a future first-rounder opened a roster spot that Allen would fill nicely. Considering what a strong fit this is from a style of play standpoint, the Hawks are VI’s favorite to land his services. 3-to-1.

Tomorrow night (2/17), NBA TV will air an interview with Ray Allen on After Dark with Rick Fox. Sounds like it will cover details of his decision-making, including his concern for helping a team in need.

.@RickFox sat down with Ray Allen to talk about his future. Catch the full interview this Tuesday night on NBA TV! https://t.co/tNA7S5iD7z
— NBA TV (@NBATV) February 15, 2015


Steph sidebar: If Ray does decide to hang up the high-tops, we can always hold out hope that the rumored sequel to "He Got Game" becomes a reality. Maybe this is why he's working on his fitness?

Spike Lee and Ray Allen have talked about a 'He Got Game' sequel (via @SI_ExtraMustard) http://t.co/Pdza0FbqQD pic.twitter.com/pAFZessGy5
— Sports Illustrated (@SInow) February 11, 2015