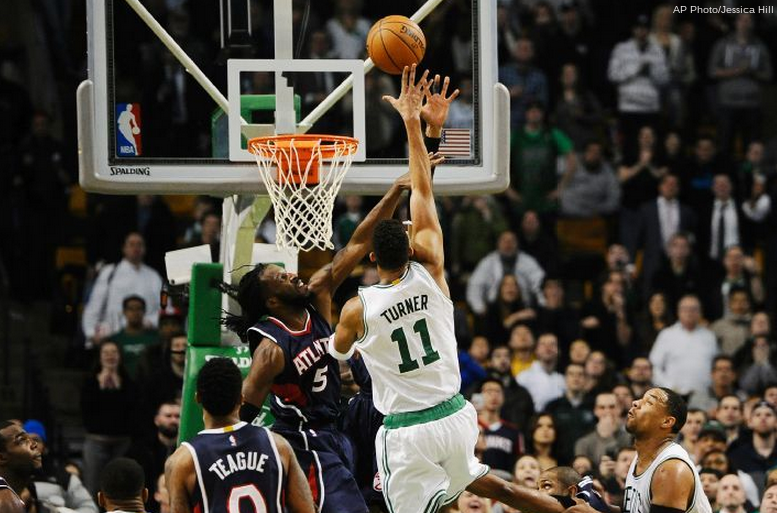 The Celtics shot 32.3 percent from the floor yesterday (30-for-93).  Oddly enough they also shot exactly 32.3 percent from three-point range (10-for-31).  You don't win when you shoot that badly.  Mass Live's Jay King plugged the numbers into Basketball-Reference and found only 17 previous games in Boston history in which it shot so poorly.  The C's lost every time.  Although, ESPN Stats & Info claims it did happen once before:


Ten different Celtics took the floor against Atlanta.  None of them shot better than 40 percent.  So how did Boston possibly beat the conference's best team under these circumstances?  Gary Washburn sites rebounding and second-chance points:

It was the first time in two years Boston won after trailing by as many as 18 points.  Heading into the game, Atlanta was 35-0 this year when holding a lead of 10 or more.  The Hawks were the only team in the NBA never to have blown a double-digit advantage this season.

Atlanta led the game for 47 minutes and 30 seconds.  For the opening 29.8 seconds (or so) before the Hawks scored their first bucket, it was tied 0-0.  The Celtics led for the final 0.2 seconds after Evan Turner's game-winner.

Now here's the really crazy thing: It was Boston's first one-point victory at home in nearly 10 years.  The C's last one-point win at the TD Garden FleetCenter came on March 16, 2005.

Celtics had lost 12-straight one-point home games in the last ten years, three of them to the Lakers. C's PG in the last win? Gary Payton.
— Sean Grande (@SeanGrandePBP) February 12, 2015