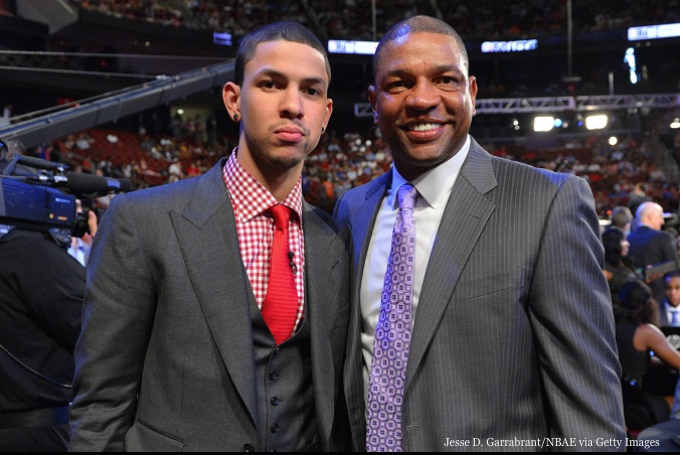 Doc Rivers hasn't relished coaching against his son at the professional level. Not being able to always root for Austin has proven to be uncomfortable for him as a Dad.

Via Chris Forsberg of ESPN Boston:


"It's just a strange dynamic," Rivers said of only the fourth father/son battle in NBA history. "I didn't enjoy it, honestly. I know it's neat for everyone else, but, as a father, I don't know if I enjoyed that."


Since Austin Rivers entered the league in 2012, the father and son have co-existed as opponents. Just three short years later and all that could change. They say basketball is a business but there’s a distinct possibility that the business is about to hit a lot closer to home for the Clippers organization.


Sunday afternoon, word spread that the Clippers' hunt for an additional team to engage in acquiring Austin Rivers had begun.


Adding fuel to the fire regarding Austin skipping a stop in Boston and going straight to LAC was Danny Ainge's comment prior to the Celtics playing the Pelicans, Austin's former team.

#Celtics president Danny Ainge: There is uncertainty with Austin Rivers. He could be in town shortly.
— Scott Souza (@scott_souza) January 12, 2015


By the time opening tip-off had taken place in Boston on Monday night, word was that a trade might proceed moving Austin Rivers from the Celtics to LAC without a third party enlisted for the transaction.


So will the Rivers boys be the first father/son, Coach and player duo in the NBA? Several father son combos have seen each other on the court but they sat on opposite benches. None have pursued an NBA title as a family unit. I’m not sure there are many things that could top this in professional sports except maybe at the Olympic level and this certainly sets a precedent for that happening, too.

Not only would this be really fun to watch from a fan’s perspective – and I barely hesitate to say that this would include me as a Celtics fan, a big Doc Rivers fan and an even bigger fan of cool things like a Dad coaching his son in the NBA. It could also do great things for the Clippers organization from a talent perspective, provided Austin would play well for his Dad. When I played the game, my Dad was my coach (and my only coach). I am pretty confident I played better for him than I would have played for anyone else and that was without a paycheck, nonetheless. In general, I think its safe to say no one wants to disappoint a parent.

I now find myself rooting for this move, as if it didn’t involve the Boston Celtics. It's like the feel-good part of the storyline has consumed me completely. I digress. I also think this could catapult the marketing of the Clippers brand to the next level, pulling at the heartstrings of an entirely new audience. I can see all the potential headlines and taglines now: Rivers Run Deep, Like Father Like Son, Father Knows Best, Father of the Guard, Every Day is Father’s Day, Rivers Reunited, A Tale of Two Rivers – the possibilities are seemingly endless. Let's not forget the potential for a biopic, who wouldn't watch this movie? Sign me up! In the meantime, I will wait for this to unfold and root quietly for a father and son to share an NBA bench.