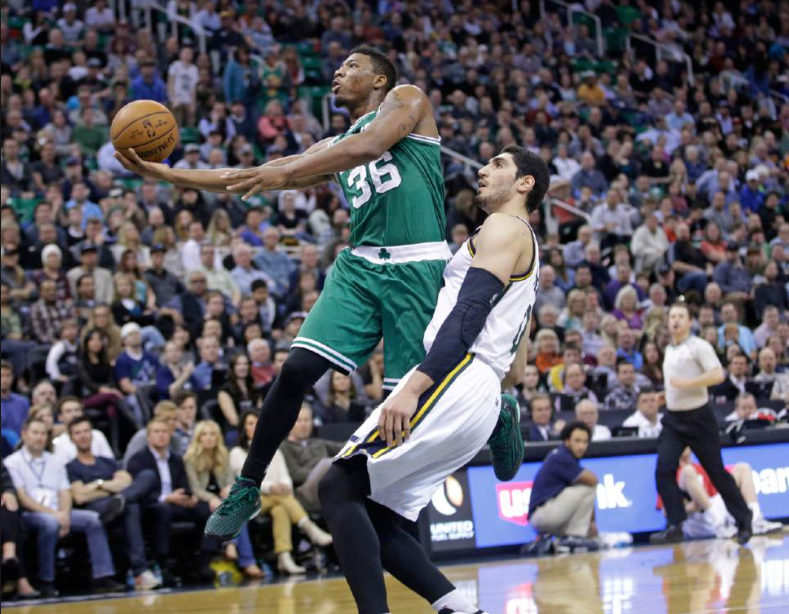 Selected back to back in the 2014 NBA draft, Marcus Smart (6th overall) met Dante Exum (5th overall) on a NBA floor for the first time Monday night.

Boston came into Energy Solutions Arena, in Utah, and edged out the Jazz 99-90.

As far as the matchup between Smart and Exum, let's just say the bout had a clear winner.

Smart poured in nine points and dished out five assists, going 4-of-9 from the floor. In 28 minutes he had a +/- of +7, making a number of key plays on the defensive end, down the stretch.

Before tipoff, Exum knew his hands would be full with the Celts' young star:

Per Aaron Falk of the Salt Lake City Tribune:

He just brings a different energy. He’s a physical guard, strong. So it’s just about learning how to play with that, whether it’s on offense or defense, and adjusting to it.

He’s improved defensively – I played against him in the U19s, so I kinda knew a little more about him than probably anybody else. He’s playing very well on the defensive end, and his offense is going to come.

For Exum, this wasn't a night to remember. The 19-year old was scoreless in 25 minutes, going 0-for-2 from the floor, with two assists.

His +/- for the game was a -24 – not a statistic you want to brag about when you're having trouble winning over fans at home.

It's safe to say the next coming of John Stockton has yet to walk through that door, but the PG from Australia has a lot of room for improvement, as expected when you're one of the youngest players in the league.

Jazz coach Quin Snyder had his own take on the comparison between the two young playmakers, as told to Aaron Falk:

They're both young guys. Probably the biggest difference is Dante was either playing in Australia, in essentially an Australian high school league, or was out for an entire year. Marcus played against tougher competition. You can see that in his competitiveness and his ability to play the game at a pretty high level.

The two won't meet again until March 4th, when the Jazz make their yearly visit to the TD Garden.

Rob Welch1/27/2015 08:39:00 PM
Share
Rob Welch
I have been a die hard Celtics fan since birth, even though I don't really want to talk about the ML Carr/Rick Pitino Eras but I will if necessary.
Newer
Older