Green Target: Boston should get into the mix for Reggie Jackson 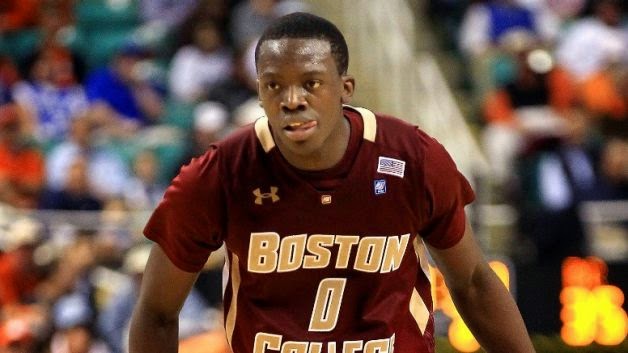 It was the summer of 2011. The Boston Celtics were still stinging from losing to the Miami Heat 4-1 in the second round of the playoffs, but the focus had turned to the draft.

Since Boston was still competing for titles, finishing with a 56-26 record on the year, they owned the 25th overall pick. Plenty of names were bandied about for that pick, but my attention was directly focused on Reggie Jackson. You may have noticed that I tend to latch on to a player that I want Boston to draft and ride the idea straight into the ground. It happened with Dennis Schroder (ugh, still hurts) and with Marcus Smart. I'm leaning towards Willie Cauley-Stein this year, but one or two of the available wings are also intriguing. But I digress.

Jackson was projected as an athletic guard who could score at will. He improved every season in his three years at Boston College, culminating in a junior year where he put up 18.2 ppg, 4.5 apg, and 4.3 rpg while shooting 50.3 percent from the field. Not too shabby.

Picking Jackson just made too much sense. While he wasn't born and raised in Boston, he was the best player from a prominent Boston school with first-round talent and he was projected to be available when Boston made its selection. The team had picked Avery Bradley in the previous draft, but that was based solely on Bradley's defense. Having a one-two punch off the bench with Bradley's defense and Jackson's offense in the backcourt seemed like a no-brainer.

And he was there, still on the board as the draft moved into the bottom third of the first-round. The picks kept rolling in and Jackson's name wasn't called. One more pick to go. It was the Oklahoma City Thunder's pick. Surely they wouldn't grab Jackson. They had Russell Westbrook, James Harden, Thabo Sefolosha, Eric Maynor and Derek Fisher all on the roster. How could they possibly need another guard?

Then, it happened. The Thunder had picked Jackson. My devious plan for a backcourt featuring Rajon Rondo, Ray Allen, Bradley and Jackson had been shattered. The pick appeared to rattle Danny Ainge as well, because he promptly traded down and picked everyone's favorite "Ainge can't draft" example in JaJuan Johnson. What could have been a great pick by Ainge, assuming he would have snagged Jackson, instead turned into quite possibly Ainge's worst pick as a GM (the Fab Melo pick be damned).

Alright, enough with the history lesson. The whole point of this is that Jackson is now available via trade.

OKC was close to trading Reggie Jackson to Denver, according to a source. He is expected to be moved before the deadline.

Should Boston make a play for Jackson? Yes, they should. Thanks for asking.

Jackson is just 24 years old, young enough to build with, and he's having his best year as a pro this season. In 43 games, Jackson is averaging 13.9 ppg, 4.4 apg and 4.1 rpg. Critics will point to Jackson's inefficiency as a shooter, which is absolutely justified, since he's only making 28.5 percent of his threes and is shooting 42.9 percent from the field. But he has shown that he can be much more efficient. Just last season, Jackson made 33.9 percent of his threes.

There's also the issue of his contract. Jackson will be a free agent this summer, but he's a restricted free agent. Meaning Boston can match any offer from another team for his services. That gives plenty of leverage to Boston. If they trade real assets for Jackson, teams will know it won't be easy to pry him away.

Is Jackson worth a max deal? No, and if a team offers him that, Boston should take a hard look at whether to keep him. But it's important to remember that Boston will actually have cap space this summer and there aren't a bunch of great, young free agents to use that money on. It's also important to note that a "max contract" for a restricted free agent this summer won't be as big of a hit to the salary cap once it jumps significantly in 2016 with the new television deal. Now is the time to lock up young talent.

In terms of Jackson's role on the team, he and Smart would make a great backcourt to build with. Smart can defend the opposing team's best guard and Jackson can take care of the scoring. They both fill up stat sheets with assists and rebounds. Smart's much improved three-point shooting and Jackson's ability to make threes, though not quite on display lately, should create a deadly duo.

It's hard to say what Oklahoma City would want for Jackson, without knowing what Denver was contemplating giving up for him. Would Boston have to include James Young? How many picks would it take? Not that Boston doesn't have a few to spare.

One possible scenario involves trading Brandon Bass, Evan Turner and a pick or two for Kendrick Perkins and Jackson. Bass would be a big upgrade over the corpse of Perkins this season and Turner is under contract for next year, so the Thunder would be confident knowing they would have his ball handling skills off the bench past this season. Boston could simply absorb Jackson's contract using one of its Traded Player exceptions and throw a couple picks at Oklahoma City. Swapping Kelly Olynyk for Jackson also makes sense for both sides. But, again, without knowing what the Thunder want, all of this is just a stab in the dark.

Bottom line: Boston had its chance to add Jackson into the fold snatched away at the last minute. Ainge has the opportunity to rectify this and he should. The Celtics would get a real nice, young guard to build with alongside Smart and their talents seem to compliment each other very nicely. Don't hold your breath on this deal actually happening, but it would help accelerate the rebuild.