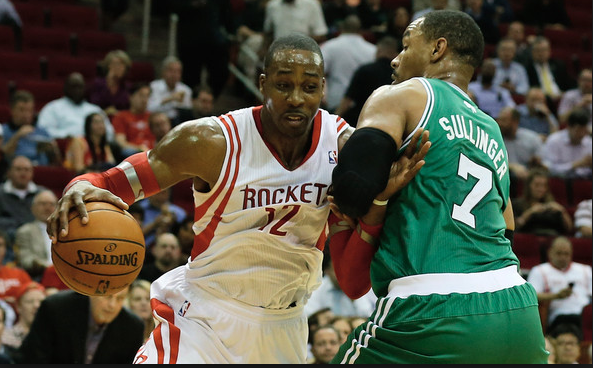 After being away from the comforts of home for two weeks, the Celtics received a nice gift Thursday night, when news broke that Houston Rockets' center Dwight Howard would miss his only visit of the year to the TD Garden:

This past November, the Rockets put a spanking on the C's in Houston 104-90. Howard tossed in 14 points and grabbed eight rebounds in the victory.

You almost forget that Howard came in second to Derrick Rose in MVP votes, back in 2011, when he averaged 22.9 points and cleaned the glass for 14.1 rebounds per. He may not be the force he was once was, but he's averaging 1.4 blocks per game, this season, and can still change the way you play down low on offense.

His last visit to Causeway, last January, was a memorable one– the nine-time All-Star dominated the Celtics for 32 points and took down 11 rebounds in a 104-92 win:

The C's are coming of a bad loss, to a terrible Minnesota team, and could use all the help they can get against the 32-14 Rockets, who are still 10-4 this year without Howard.

Rob Welch1/30/2015 01:59:00 PM
Share
Rob Welch
I have been a die hard Celtics fan since birth, even though I don't really want to talk about the ML Carr/Rick Pitino Eras but I will if necessary.
Newer
Older