Rajon Rondo triple-double watch, and his best assist of the season? (Video) 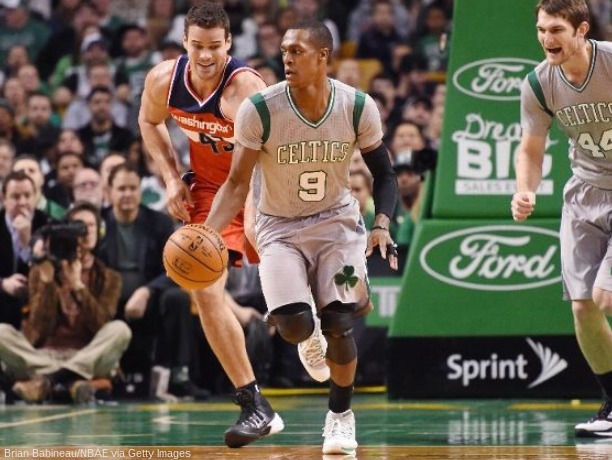 Yesterday afternoon Rajon Rondo posted his second triple-double this season, logging 13 points, 13 rebounds and 11 assists in Boston's 101-93 home win over the Wizards.  Rondo is the only player in the NBA with multiple triple doubles this year (Kobe Bryant, Tim Duncan, Chris Paul, Kyle Lowry and Michael Carter-Williams each have one).

Dating back to Rondo's first ever triple-double, on December 3, 2008 against the Pacers, he now has 31 of them over the course of his career (21 in the regular season, 10 in the playoffs).  That's more than anyone else in the NBA since the 2008-09 season (and he missed a year with a torn ACL).  LeBron James is second in triple-doubles in that span with 28 (20 regular season, 8 playoff).

The Celtics point guard also nearly missed a triple-double in Friday's victory over the Lakers, in which he put up 12 points, 8 rebounds and 16 assists.  Over the Celtics' last two games he's averaging 12.5 points, 10.5 rebounds and 13.5 assists.

Rondo's 11th assist yesterday was as impressive a pass as you'll ever see: