Tyler Zeller is the most efficient scorer in the NBA 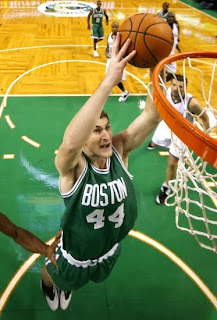 If I asked you who the most efficient offensive player in the NBA was, who would be your answer? Before reading the title I bet only one or two of you would've answered Tyler Zeller.

But alas it is true, Zeller is currently leading all NBA players in score percentage (the percentage of possessions finished that result in at least a point) at 86.4%. He is leading in this stat by nearly 10% as well.

What this means is that out of every offensive possession that Zeller finished he produced at least a point in 86.4% of them. Not only that, but he is shooting 85.7% from the field on the season (12-of-14).

Clearly six games and 72 minutes isn't a good sample size but these numbers shouldn't be ignored.

This is the same Tyler Zeller that most of us would have been content with seeing in a suit on the bench this season after his play in the preseason. A little extreme, but after only shooting 53.8% (not great for a big man who does most of his damage in the paint) in the preseason and not looking like he knew any of the teams plays his jump in overall play is a welcomed sight to say the least.

He's also looked good on the court in regards to being in the right spots at the right times, proof that he is becoming more familiar with Brad Stevens' system. His passing has been exceptional for a big man too, totalling seven assists on the year. At the same time, Zeller has limited himself to only one turnover, down from his 11 in eight preseason games.

After acquiring him from the Cleveland Cavaliers as part of a three-team deal in July many people liked the trade only for the 2016 protected first-round pick the Celtics got from it. For the time being at least, Zeller has definitely had the biggest impact for his new team. Marcus Thornton has played okay but is inconsistent and Jarrett Jack hasn't been the replacement for Shaun Livingston the Brooklyn Nets were hoping he'd be.

Zeller's outstanding play so far has helped his case in finding himself an everyday role on this squad and if it continues there should be plenty of minutes for him to eat up.

Of course even if he'd boast the same numbers by seasons end he'll never be the Celtics' true number 44 (sorry Danny Ainge, you neither).