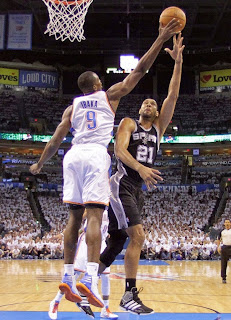 Tonight, at TD Garden, the Boston Celtics face Oklahoma City who are coming off an 85-78 loss last night in Milwaukee. The Thunder shot just 29-87 (33%) from the field in the game against the Bucks.

With both Russell Westbrook and Kevin Durant out OKC has been playing a lot of zone and may play even more tonight (in order to rest their legs) considering they're facing a back to back after traveling from Wisconsin.

Marc D'Amico talked about the Thunder's penchant to play zone on Celtics.com:

Oklahoma City, without the services of Durant and Russell Westbrook, is using its big men to its advantage this season by playing much more zone defense than it has in the past. In previous seasons, the Thunder played man-to-man defense almost exclusively. This season, according to the Celtics’ basketball operations group, they have played about 30 percent of their defensive possessions with a zone concept.

This Thunder team is much longer and more athletic along the frontline than most NBA teams. That’s why it has been able to play successful zone defense at the highest level of basketball. In fact, as Boston’s front office relayed to Celtics.com, Oklahoma City has been a better defensive team from a statistical standpoint when it has played zone as opposed to man defense.

As a result of the zone expect a barrage of threes (and perhaps a big game from Avery Bradley) from above the free throw line extended on penetrate and kicks from Rajon Rondo.

This should bode well for Boston who have shot the ball 45-125 (36%) as a team for the season from beyond the arc if you take out that 1-25 clunker the C's put up against Houston in the second game of the season.