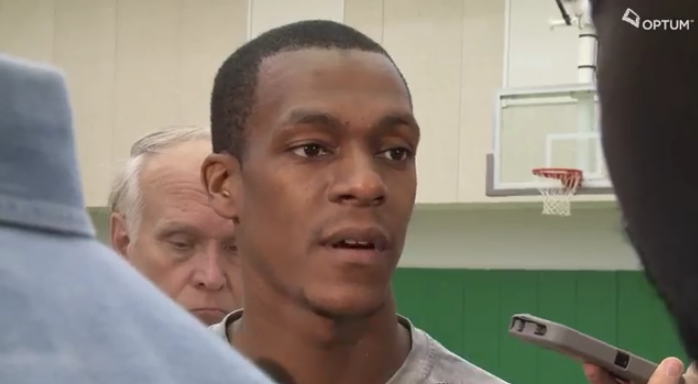 Here's what Rondo said at practice yesterday, via Brain Robb of Boston.com:

Danny [Ainge] made a decision at halftime [of last Friday’s game]. I didn’t have any idea. I came in very pissed off [about missing the trip to Chicago] but the team got the win.

I just wanted to go travel with my team and play in Chicago. I thought we had the day off Sunday anyway, and I thought I could do it Sunday [and rest two days before Wednesday's game]. But they make the decisions.

The screws were irritating me a little bit. I was getting X-rays on it weekly and Dr. [Brian] McKeon thought I would be able to make it to All-Star weekend. But I wasn’t. And he kind of pulled the trigger [on having the screws removed] the next day.

For people freaking out about the headline, I do not believe this is a sign of friction between Rondo and Ainge, or that this can be used in any way as evidence the point guard wants out of Boston.  I think it just shows Rondo is a competitive guy who wants to be on the floor with his team (insert mandatory Derrick Rose dig about a point guard actually wanting to play in Chicago).

As far as the timing goes, maybe Ainge figured Rondo might not be ready for the Thunder matchup tonight (which he is) if he waited until Sunday to undergo the procedure.  It's hard to argue against having it done sooner rather than later, especially since most people had probably written the Bulls game off as a loss either way.

Or, we can use this as early fodder for a 2014-15 tanking conspiracy--too bad the C's won in Chicago anyway.