Ainge on Marcus Smart's ankle: "I'd be surprised if he was ready this weekend. … I think he's probably at least a week away."
— Ben Rohrbach (@brohrbach) November 20, 2014 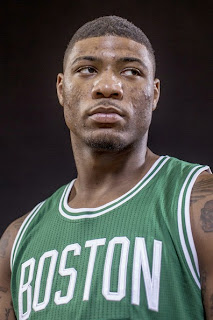 Notice Ainge said "at least", hopefully this isn't hinting at possibly more time out of the lineup for Smart.

More than likely it was just a way for Ainge to tell us not to get ahead of ourselves.

As I posted yesterday, if Smart were to make his return to the floor sometime next week he'll be put to the test defensively straight away facing off with either Damian Lillard, Derrick Rose (if he plays) or Tony Parker.