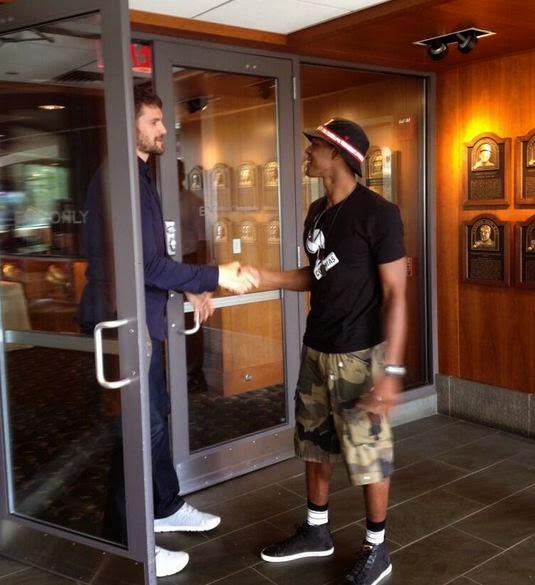 The Cleveland Cavaliers are in town, which may stir up some hard feelings from Boston fans. First, the team is again led by LeBron James, the object of much scorn and ridicule. Second, the team also features Kevin Love, a player many in Boston wanted in green, even if it was a long shot at best.

Who could forget Love's very public visit to Boston back in May? As the pictures of Love in Beantown grew on social media, so did the hopes of Celtics fans that they might finally have that second All-Star to pair with Rajon Rondo. Rondo and Love meeting up at Fenway Park certainly fanned those flames.

Speaking of Fenway Park, Love was asked recently about that Boston trip. From ESPN:

"The fact is, my agent is a big Red Sox fan," Love said. "I'd been planning on that for a long time to come in and check out not only the city, but a Red Sox game, and we had a great time and we plan on coming back.

"It's tough because I wasn't a free agent last summer. I have potential to be a free agent this summer or next. It's just one of those things. It's obviously a tremendous city. People love it here. Basketball and sports in general are huge here, but it's been fantastic being a part of the Cavaliers now. We have a team that's formidable, has a big presence and we see a lot of you guys [in the media] on a daily basis."

While that absolutely could be true, the timing just stinks. It had been widely reported by that point that Love wanted to leave the Minnesota Timberwolves. With all the assets the Celtics had, they could have been a suitor for Love and their name was tied to Love on multiple occasions.

That he just so happened to pick that time to come to Boston and not even try to hide it appears to be more than a coincidence. Its very possible he and his agent chose to come to Boston in May to try and force Minnesota's hand. To show that he was serious about wanting out and to put the Timberwolves' front office on its heels with all the attention Love's visit was sure to garner.

Or he could have just wanted to watch David Ortiz hit home runs.

In the ESPN piece, Love also squashes that recent report saying Love would consider leaving Cleveland and signing with the Los Angeles Lakers this summer.

Again, not to call Love a liar, but what is he supposed to say there? He could be totally fine sticking around in Cleveland for the rest of his prime years. But if he was even remotely considering leaving, why would he admit it before his current team has even played its seventh game? It would be completely foolish for him to say, "Yea, I'm going to be a Laker next year. The rest of this season should be fun, though."