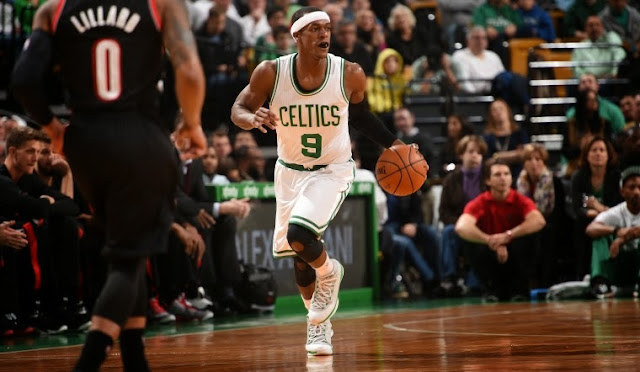 The quarter was quite sloppy as the teams combined for 3-20 to start the game with Portland going 1-12 before they started getting it going offensively.

Kelly Olynyk was the beneficiary of many of these Portland misses grabbing 7 rebounds in the frame.

Rondo had one of his best quarters of the season going 4-5 with two rebounds and two assists.

Primarily through the play of their reserves Boston increased the lead to 37-27. That is until a three point play by LaMarcus Aldridge cut it to 37-30 with 5:11 and all the Celtics starters back on the floor.

Celtics went into the break leading 49-44.

Damian Lillard, who went into the game averaging 20.9 points, 6.8 assists and 5.2 rebounds, had five points on just 2-8 shooting, three rebounds and one assist in the half.

Immediately, the Blazers repeatedly went to the Jared Sullinger on Aldridge matchup and rode a red hot start (6-7) to the half to take a 59-57 lead with 7:35 to go in the quarter.

With 12 minutes to play the two teams were deadlocked 72-72.

Blazers blasted out to an 8-0 run to start the quarter to take easily their biggest lead of the game 80-72.

The starting five reentered the game and Jeff Green scored on a hard drive and one to cut the lead to seven with 9:27 to play.

This was Portland's seventh straight win as they remain the hottest team in the NBA.